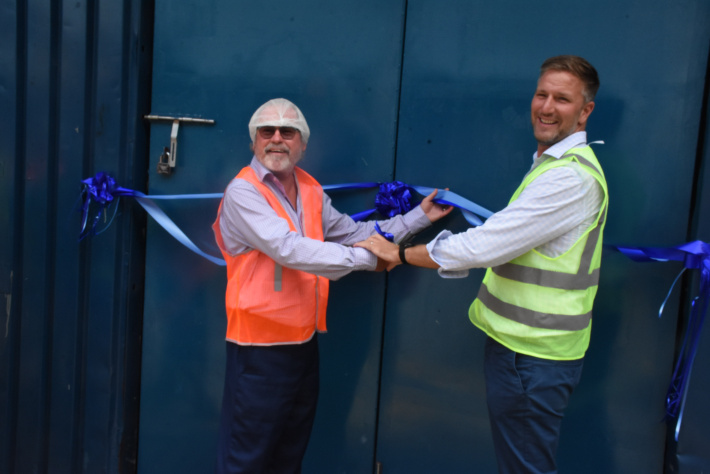 Only a few months after the launch of its new ‘SeyBrew Lite’ product, Seychelles Breweries (SBL) yesterday officially launched its new canning line which has allowed the company to introduce the ‘SeyBrew’ beer in a can format.

This will be followed in the next couple of months with Coca-Cola, Coke Zero, Fanta and Sprite cans in order to make the most use of this new asset.

It was the Minister for Finance, Trade, Investment and Economic Planning, Maurice Loustau-Lalanne, and outgoing managing director of Seychelles Breweries Nick Cook who received the honour of cutting the ribbon at the canning line.

The R13.5 million investment has been undertaken to cater for niche markets which its products in returnable glass are unable to provide for at the moment, such as consumption on boats and for out-of-home occasions.

It also expects to unlock further sales opportunities to airlines and cruise ships.

The canning line has an output capacity of 3000 cans per hour with a minimum of four operators.

Imported from Italy, Turkey and South Africa, the canning line was installed in the space of 2 weeks followed by a one-week commissioning of the line which included quality control and assurance training for new operators and for the Seychelles Breweries laboratory team.

According to Seychelles Breweries, canned drinks are favoured by various key on-trade retailers – bars, restaurants, clubs, hotels and coffee shops – primarily because they take up less space than the crates containing glass bottles.

Seybrew in cans will hit the market in less than two weeks at R32 per can.

Mr Cook noted that the introduction of the canned Seybrew beers would also be ideal for when Seychelles Breweries finally starts to export the locally brewed beer.

Seychelles Breweries are presently targeting markets in the United Kingdom and United Arab Emirates for export.

“We have done a lot of work in assessing which are the right markets for us to go to and we have narrowed it down to two key markets right now, and then we will explore the others,” Mr Cook explained.

“We will be focusing on the UK and the Emirates as well. We have meetings set up in Dubai and we have an export manager with us now, which we have never had before and which shows that we are very serious. We want to make it work.”

Mr Cook also attempted to assuage possible doubts on the quality and flavour of the canned Seybrew, stating that it would be no different than the ones in glass bottles.

“I know people had an issue with the Seybrew which was imported in a green can some six years ago, but that came from a foreign brewery, travelled a thousand of miles and it arrived in the best condition it could, which is difficult when it is not that fresh,” he stated.

“Our Seybrew is made and brewed here, and within seven days you will most likely be drinking it. It should make no difference in the flavour, whether it is in a bottle or a can. People should understand that this is the same liquid that you love, just in a different packaging format.”

On his part, Minister Loustau-Lalanne took the opportunity to praise and commend Mr Cook, who is coming to the end of his mandate, for his contributions to the local brewery.

During his term, Mr Cook chose to heavily invest in upgrading Seychelles Breweries’ facilities and bringing in new products such as ‘Slow Turtle’ cider, ‘Seybrew Lite’ and reintroducing some of the SeyPearl drinks.

“I have had an amazing time here; I love the people and the country. But most importantly I love this business,” Mr Cook said.

“I can’t deny that it was tough at the beginning. The first couple of years where very difficult but I think what we have been able to pull collectively has resulted into a fantastic business that is performing really well which is producing, in my opinion, the best beers and drinks in the world.”

Mr Cook said that he will leave Seychelles tomorrow knowing that much has been done and excited for all that is left to be achieved.

The accompanying photos taken by our photographer Louis Toussaint show some highlights of the ceremony yesterday to launch the canning line. 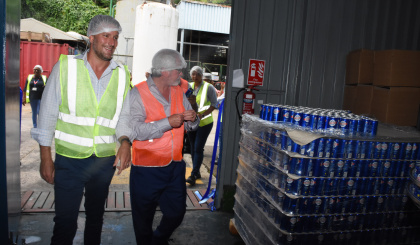 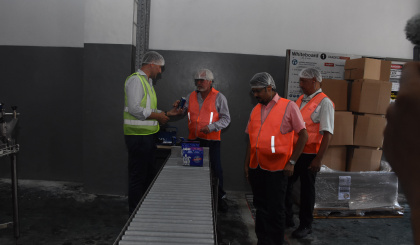 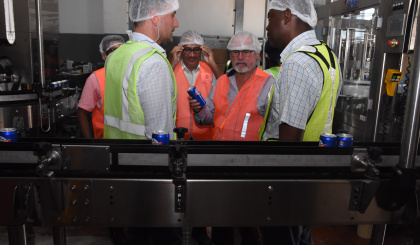 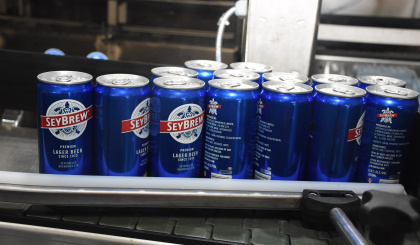