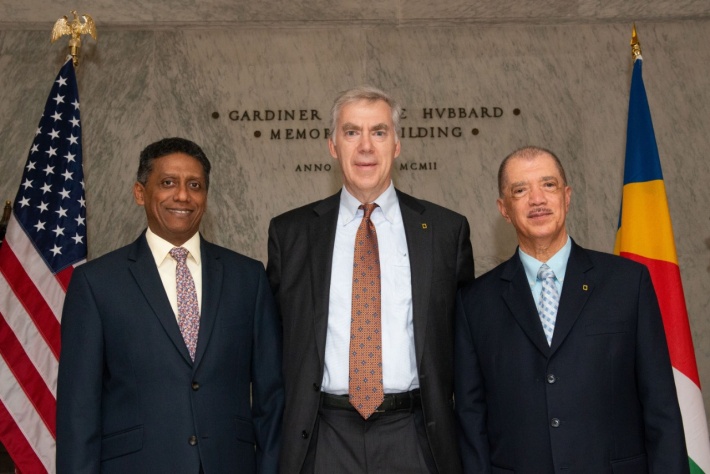 President Danny Faure and former President James Michel were honoured guests at a reception organised by the National Geographic Society on Tuesday night at the historic Hubbard Hall in Washington DC, USA.

The event, attended by National Geographic Society (NGS) leaders, donors, explorers and leaders in philanthropy, was hosted by the president and chief executive of the society, Tracy R. Wolstencroft.

The award recognises a world leader who has successfully established globally significant protected areas, such as national parks, wilderness areas, or marine reserves that are fully shielded from exploitation.

In his opening address, Mr Wolstencroft congratulated Seychelles for being at the forefront in the plight against climate change as well as for being advocates of a sustainable blue economy.

Accounts of what the country, as well as what the current and former presidents have achieved over time in marine preservation, was highlighted by the speakers, such as the expansion of Seychelles' marine protection to 26% (out of a 30% target) of its exclusive economic zone.

The exchange of gifts between President Faure and Mr Wolstencroft was another feature of the evening. A latest copy of the June 2019 NGS magazine, which contains a special piece on Aldabra, was also given to all attendees at the event.

Also present at the function was the Ambassador of Seychelles mission to the United Nations, Ronald Jumeau.