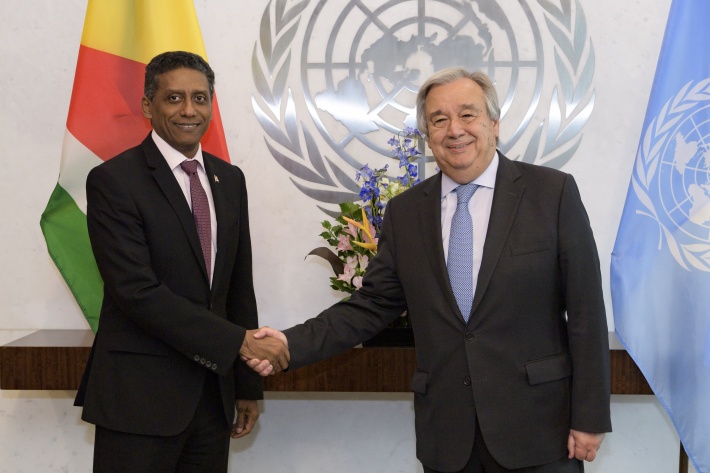 President Danny Faure called on the secretary general of the United Nations, António Manuel de Oliveira Guterres, at the UN headquarters in New York on Thursday.

Their meeting primarily focused on Seychelles' leadership on ocean conservation and the Blue economy.

The secretary general expressed “great admiration” for Seychelles’ leadership in sustainable development and governance, which he said was an example for the region and the world.

The two men agreed Seychelles and the United Nations system shared a “very strong” relationship and discussed the lead up to the much-anticipated Climate Action Summit which the UN secretary general will host in New York on September 23.

President Faure informed Mr Guterres that Seychelles is well on track to protect 30 percent of its 1.4-million-square-kilometre maritime territory by February of 2020, thereby achieving the 30x30 target a decade early.

President Faure presented the secretary general with a copy of the Seychelles Coastal Management Plan 2019-2024 which was drawn up in partnership with the World Bank and addresses such climate change effects on the islands as coastal erosion and flooding among other challenges.

The president sought the help of the UN system in his role as the African Union’s champion for the development of the Blue economy in Africa.

President Faure expressed the need to couple ocean conservancy and governance with maritime security and stressed the commended assistance by the United Nations Office for Drugs and Crime (UNODC) in countering drug trafficking in the western Indian Ocean.

Secretary general Guterres commended Seychelles on its leadership as a champion of ocean conservancy and the Blue economy and expressed his desire that President Faure attends the Climate Action Summit. 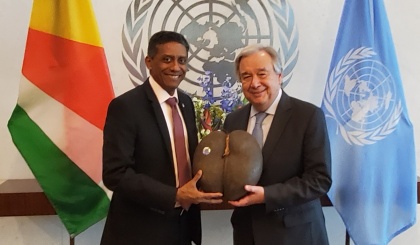