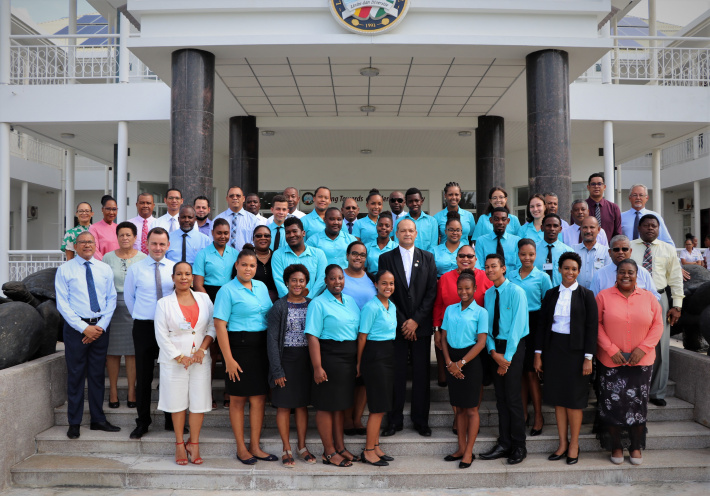 Parliamentarians and guests in a souvenir photograph

Attended by the British High Commissioner to Seychelles Patrick Lynch as well as numerous high-ranking officials, Seychelles National Youth Assembly (SNYA) cohort along with a group of students from the Perseverance secondary school, the session not only comprised a reading of the Commonwealth Day message but also the symbolic planting of three trees in the Commonwealth Garden by High Commissioner Lynch, and two pupils – Shayanne Hoareau and Misael Bristol – who have over recent periods addressed the assembly.

As is tradition, the Queen’s message was read by Speaker of the National Assembly Nicholas Prea, in which Her Majesty The Queen touched on the theme of connectivity between the Commonwealth family, noting technological advances and modern media as facilitators.

“Advances in technology and modern media have now enabled many more people to witness and enjoy – with remarkable immediacy – this experience of Commonwealth connection, in areas such as education, medicine and conservation. Looking to the future, this connectivity means we are also aware, perhaps as never before, that wherever we live, our choices and actions affect the well-being of people and communities living far away, and in very different circumstances. For many, this awareness awakens a desire to employ our planet’s natural resources with greater care, and it is encouraging to see how the countries of the Commonwealth continue to devise new ways of working together to achieve prosperity, whilst protecting our planet,” the message signed Elizabeth R read.

This year’s Commonwealth Day theme is 'Delivering a Common Future', highlighting how the 54 member countries in the Commonwealth family are ‘innovating, connecting and transforming’ to help achieve some of its biggest goals like protecting natural resources and boosting trade.

In addition to the Commonwealth Day message, the Women’s Parliamentary Caucass also issued a message on the occasion of the International Women’s Day, which was observed on March 8. Read by Honourable Noline Sophola, the member for La Digue, the message’s focus was on collective contributions and actions towards a world where there is equality between men and women and for all women around the world to unite and act against discrimination, prejudice and injustices against fellow women at all levels within society.

“It is our wish that all Seychellois women make their voices heard and realise their dreams, and to make the community, workplace and our country one in which equality and fairness reigns,” Honourable Sophola read.