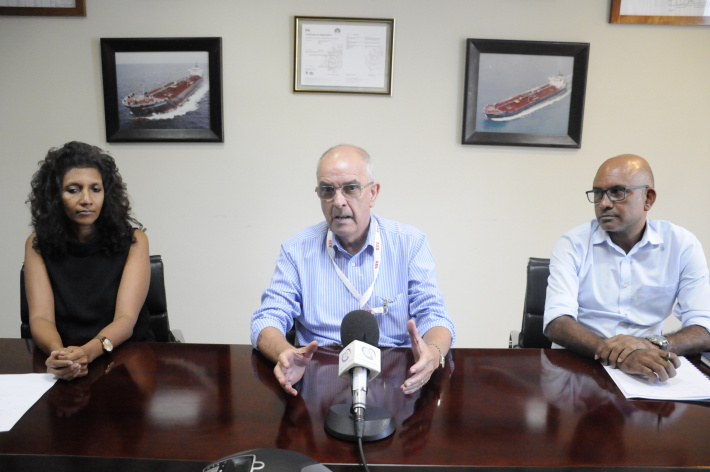 The Seychelles Petroleum Company (Seypec) has categorically rejected as false allegations that it is selling substandard fuel and has explained the different steps of the verification process of all fuel bought by the company before it reaches the pump for public usage.

This follows serious claims made by a few motorists in an SBC news report on Sunday evening that fuel bought at the pump at different petrol stations around the country is not undergoing proper verification and certification and is damaging their car engines.

In a press briefing yesterday afternoon at the oil company’s head office at the New Port, Conrad Benoiton, the chief executive of Seypec and Ray Hoareau, the general manager for technical operations, answered questions on the matter.

“I want to reassure the public that there are different steps in the fuel verification process which is mandatory for Seypec to carry out and that the quality of fuel imported in the country is of the highest quality and meets the highest international standards,” said Mr Benoiton.

He went on to add that the allegation that Seypec’s fuel is damaging car engines is also being spread on social media and the SBC has run away with it without further proper investigation.

“There are in the country some 30,000 vehicles which use mogas, almost 7,000 vehicles which refill their tanks with benzene from different stations around the country everyday and if there are 25, 30, 50 or 100 cars which are experiencing a problem, it could be linked either to the type of cars, if the cars are being properly maintained, the vehicles specifications are not allowing them to receive fuel here and additives that some drivers add to their fuel for different reasons…”, Mr Benoiton pointed out.

For his part Mr Hoareau explained the different standard procedures and parametres set and noted that all their suppliers abide by standards and all Seypec fuel products are further tested for verification and certification in different independent laboratories in South Africa and the Middle East.

Mr Hoareau also explained in details the high standard filtering process that the fuel undergoes and the mandatory morning water checks carried out on the fuel tanks everyday, again before reaching the pump for public usage.

Asked if there could be any possibility that water is filtering in the fuel tanks at some stations, Mr Benoiton said the Victoria North Station concerned in the news report delivers fuel to around 1400 cars per day, there would therefore have been several more cars reporting the same problem. But in order to try and get to the bottom of the complaint, Mr Benoiton said Seypec has taken fuel samples from the different stations concerned and sent abroad for further analysis to confirm to the Seychellois public that the fuel it provides is safe and there is nothing wrong with it.

Mr Benoiton has deplored the fact that none of the vehicle owners have at any point contacted Seypec to report their complaint and the problems they were having with their vehicles, something he said the company would have welcomed and advised them to bring over their transport to be verified.

He added that the oil company is still ready to receive the vehicle owners in question and address their concerns.