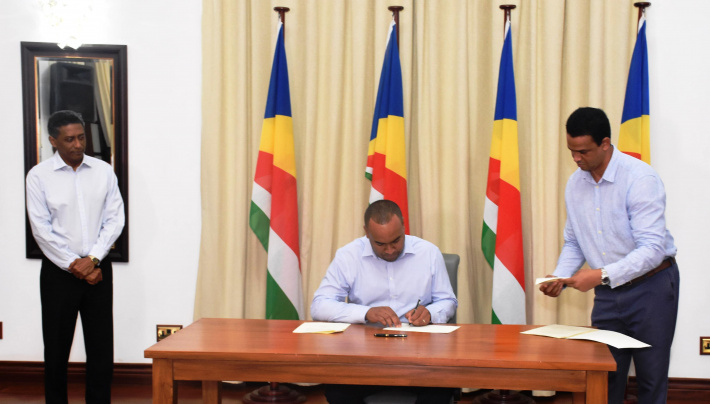 30% of our ocean under protection

President Danny Faure proudly made this announcement to the Seychellois public and the world yesterday at State House.

“It is a great honour and privilege for me today to announce the designation for the new marine protected areas into law. With the signature and gazetting of the legal instruments, 13 new areas will be declared as protected under the National Parks and Nature Conservancy Act, totalling an area of 410,000 square kilometers,” President Faure said.

President Faure was a witness at the signing at State House of the orders that designated the 30% of our exclusive economic zone (EEZ) as Marine Protected Areas, which was signed by the Minister for Environment, Energy and Climate Change (MEECC) Wallace Cosgrow.

Also present were the secretary of state for cabinet affairs, Mohammed Afif, the principal secretary for environment, Alain de Comarmond, and Helena Sims, the project manager of the Marine Spatial Plan (MSP). The latter is responsible, along with government and other stakeholders like the Nature Conservancy, for identifying the areas to be protected for future generations.

This significant milestone delivers on the world’s first debt refinancing for ocean conservation, which was co-designed by the Nature Conservancy and the government of Seychelles. The implementation of the law in regards to the Marine Protected Areas will be 2021.

15% of the Marine Protected Areas of high biodiversity are gazetted as Marine National Parks where almost no human activity other than sustainable tourism will be permitted. They include the waters surrounding the Aldabra group, marine areas in the Amirantes including D’Arros to Poivre, and the South of Amirantes and Bird Island, one of the only two sand cays in the inner island group.

The remaining 15%, falling within the Amirantes to Fortune Bank and which are of medium biodiversity, will be designated for sustainable use where activities vital to Seychelles’ economy will continue to operate but will be managed under new sustainability regulations.

In his address for the occasion, President Faure described the legal designation of one third of our ocean territory as a Marine Protected Area as a great milestone.

“Seychelles’ marine ecosystem is the foundation that the economy is built upon, with fisheries and tourism being the primary pillars of our economy. With over 1.35 million square kilometres of ocean, the people of Seychelles have a direct dependence on our ocean resources for food security and livelihoods. Developing a Marine Spatial Plan is a way of tackling the sustainable development of the ocean for today and future generations,” President Faure said.

“Realising the importance of the ocean to the people of our nation, at the Rio 20 United Nations Conference on Sustainable Development in 2012, otherwise known as RIO 20, I had the opportunity on behalf of the country to announce a bold decision to increase marine protection from 0.04 to 30% of our EEZ by 2020. This was long before today’s global target of 30% ocean protection by 2030. Our achievement today is 10 years ahead of international targets. Seychelles is 10 years ahead,” President Faure said, noting that from this commitment emerged the vision of our Blue Economy – a shared opportunity and responsibility to use ocean space for conservation, adaptation, innovation, and sustainable development.

President Faure also explained that the Seychelles Marine Spatial Plan, as a government-led initiative to achieve this vision, is an output of the award-winning debt-for-nature swap, which was formalised through the creation of the Seychelles Conservation and Climate Adaptation Trust in 2016.

He further said that the achievement also supports the government’s commitment to the Blue Economy Agenda, in addition to the UN Convention on Biological Diversity and the UN Sustainable Development Goals, particularly Goal 14 on Life under Water.

As champion of the Blue Economy, President Faure commended the work being done by the Seychellois youth in protecting our ocean and he further called on them to take the lead as the country embarks on the next phase of an exciting journey towards a prosperous blue economy.

He also saluted the efforts of former President James Michel who took bold actions for conservation, pioneering innovative means of marine protection and thanked all those involved in realising this commitment.

On behalf of the Nature Conservancy and the Marine Spatial Plan initiative Core Team, Ms Sims said that Seychelles is very proactive when it comes to the conservation of critical marine resources and environmental concerns are firmly entrenched in Seychelles’ constitution. With fisheries and marine-based tourism being the two pillars of the country’s economy, the ocean is central to Seychelles’ development and for future generations to come.

“Today we witness Seychelles taking a huge step towards realising its long-term vision for healthy oceans and a prosperous national economy,” Ms Sims said, noting that the Nature Conservancy is proud to have been a partner and thanked everyone who helped in the finalisation of the third milestone of the Seychelles Marine Spatial Plan initiative. 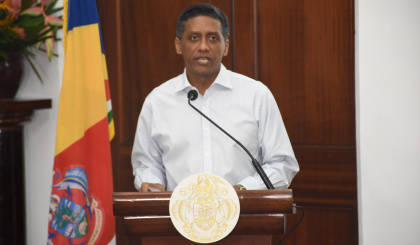 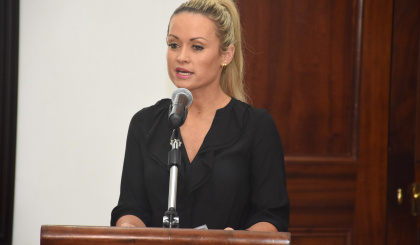 Seychelles affirms its commitment to the UN Food Systems transformation   |25.09.2021

20th anniversary of the adoption of the Durban Declaration and Programme of Action |24.09.2021