The music industry is forever changing and as an artist you either change with it or get left behind. For many Seychellois artists the only option they have for selling their music is through CDs at local music shops, and just like its predecessors like cassettes and vinyl, it is becoming obsolete.

To educate artists about the benefits of having an online presence, the National Arts Council (Nac), in collaboration with Gilles Lionnet, organised a training session this week at the International Conference Centre (ICCS) which was attended by musicians, the chief executive of Nac, Jimmy Savy, and the chief executive of the Creative Industries and National Events Agency (Cinea) Galen Bresson.

“Artists need to find new ways to keep up with the time and market to the younger generation,” said Mr Savy.

He added that by doing so Seychellois artists will expand their fan base from a small market of 30 to 40,000 to millions of fans across the globe and this will allow them to not only increase their fan base but bring in foreign exchange for them and the country.

“The world of music is very dynamic and many young Seychellois are involved in the local music industry and through these sessions we will share with them the other ways in which they can sell their music to a broader market instead of just relying on the music shops and word of mouth,” said Mr Savy.

Mr Savy also noted that along the way these sessions will be conducted with visual artists to show them how to market their work online.

The three-hour session was conducted by Gilles Lionnet who noted that his aim is to show artists every possible outlet to monetise their music through distributions, digital platforms and streams.

“The idea of the session is to show artists the steps they need to take as well as the technical aspects such as their cover art and how to upload their music,” said Mr Lionnet.

He noted that musicians, whether they like it or not, will have to adapt to this way of selling music as it has become a ‘new normal’ especially during the COVID-19 outbreak where many artists were utilising social media to engage with their fans and share new music.

“All the tools that will help them grow their careers,” he said. “When artists release music on digital platforms they are given a code which alerts them each time their song is being played so they can get paid,” added Mr Lionnet, himself a musician, song writer and singer.

There are many digital platforms that artists may use to distribute their work such as Spotify, apple music and deezer. One of the main sites Mr Lionnet touched on was TuneCorp which allows any musician to sell their songs worldwide while keeping 100% of their sales revenue. Today, TuneCore is the world’s leading digital music aggregator and partners with digital stores worldwide.

On his part Galen Bresson noted that the creative world is having its second revolution where online platforms are becoming the new normal for artists.

“There are a lot of risks when it comes to putting your music online so this is why Mr Lionnet is doing this workshop to share his experience and help other artists go about it the right way,” said Mr Bresson.

“We must make sure that we protect all of our artists and creators, and this is the role Cinea will take,” he said.

The session was the first of many to be conducted with the aim of reaching out to as many artists as possible. 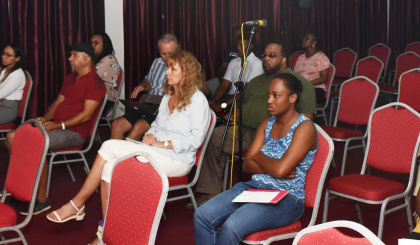