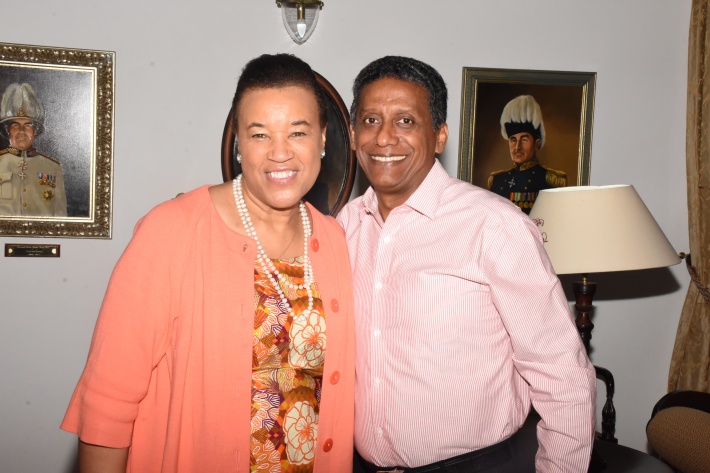 Secretary General of the Commonwealth Patricia Scotland called on President Danny Faure at State House yesterday morning, for a brief visit in which she congratulated him for his leadership and the milestones achieved by Seychelles in relation to the blue economy.

Mrs Scotland, who is on a working visit to Seychelles for the first-ever Commonwealth Africa Innovation Ecosystem Workshop being held at the Savoy Resort & Spa, congratulated the president on the Planetary and Leadership Award which he was presented with at the National Geographic Awards held earlier this month in Washington, USA.

“We have been working very closely on the climate change action plan, you know that we devised with Seychelles the Blue Roadmap which is now being used but also that we are partnering with Seychelles and Nekton to explore the ocean. They say we know more about the moon than what is on the bottom of our ocean and yet again, Seychelles is taking a leadership role in helping,” Mrs Scotland noted.

She commended President Faure for Seychelles’ magnificent record in terms of the marine management, making reference to the 28 percent of the oceans in Seychelles which are under conservation.

“Just 2 percent left to go and if Seychelles does that by the end of this year, it will be ten years in advance of what everyone else is expecting because the hope and aspiration is to have 30 percent by 2030 and Seychelles is on track to having 30 percent by 2020,” she said.

Furthermore, the two discussed trade and the numerous opportunities that are available from the blue bond. Mrs Scotland assured that the Commonwealth will continue to support Seychelles on account of the “extraordinary leadership” which gives hope to the other 30 small states which form part of the Commonwealth.

“We know of the 2.4 billion people in our Commonwealth and the 53 countries and 31 of those countries are small states. There are only 39 small states in the whole world. So what we do here, together with Seychelles is not just important to Seychellois but it is also important for the other 30 small states who are seeking to deliver on the Sustainable Development Goals (SDGs) and that leadership is giving a lot of courage, a lot of support to others,” Mrs Scotland concluded.

Mrs Scotland will be undertaking other work commitments during her visit including the final day of the Innovation eco-system workshop.