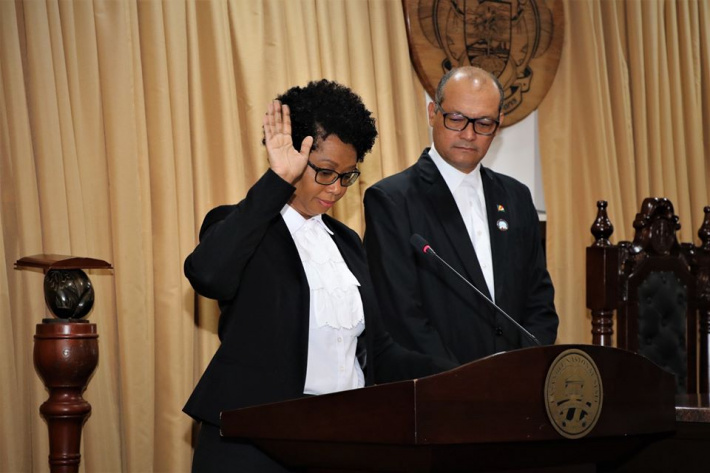 Tania Isaac was yesterday sworn in as the new clerk of the National Assembly, filling in the post that had remained vacant for over seven months.

Mrs Isaac took the oath of allegiance to protect and preserve the Constitution of Seychelles yesterday morning to become the 11th clerk of the National Assembly.

Speaker Nicholas Prea noted that Mrs Isaac’s promotion came after she was interviewed by an independent panel comprising persons outside of the National Assembly.

As the clerk, Mrs Isaac is the de-facto chief executive (CEO) of the National Assembly responsible to the Speaker and manages the secretariat and the business of the House, provides parliamentary support and advice to the Speaker, dispenses administrative support to the members among other functions.

Prior to her new appointment, the 36-year-old held the office of deputy clerk for two and a half years, and replaces former clerk Jutta Alexis.

“She is a competent woman who has accompanied us on various missions where we have seen both her proficiency and discipline. She does not joke around and is dedicated to her work,” stated the leader of government business, Charles De Commarmond.

“Now that this cohort of the National Assembly is coming to an end, it would be crucial for her to bring the institutional memory and continuity for the benefit of the new cohort that will come in,” he added.

On his part, leader of the opposition, Wavel Ramkalawan, told Mrs Isaac that the incoming 7th National Assembly will heavily depend on her since it would be a new composition of parliamentarians.

“You will have a lot of responsibilities on your shoulders and I hope God will bless you and give you the ability to undertake your functions, and do not let any Speaker interfere in your work,” Hon. Ramkalawan stated.

As for the new clerk, she stated that she is looking forward to working with the secretariat and the 7th National Assembly “because even though I am the clerk of the National Assembly it is nonetheless the work of all the staff that brings this institution forward”.

Mrs Isaac has 19 years of working experience in the public service; 12 years in the Executive and 7 years with the Legislature. She began her career journey at the National Assembly in April 2013 as a research officer and rose through the ranks.

She has led different parliamentary services such as Information Centre, IT, Public Relations and Parliamentary Reporters as Deputy Clerk and led the Administration of the Secretariat of the National Assembly in the absence of the Clerk.

She is a certified parliamentary manager and has been trained and learned from best practices in parliaments across the world with both Westminster and Presidential systems. She has a BA Degree with Honors in Human Geography from the University of Leicester, an Advanced Diploma in Human Resources Management from School of Business, University of Leicester and a Professional Development Certificate in Parliamentary Management from the McGill University, Canada.

Born and raised at Anse Boileau, Mrs Isaac is married with two children. She enjoys jogging to keep fit and is a keen social researcher.