Reception in honour of the Prime Minister of St. Vincent and the Grenadines, Dr Ralph Gonsalves |01 July 2019 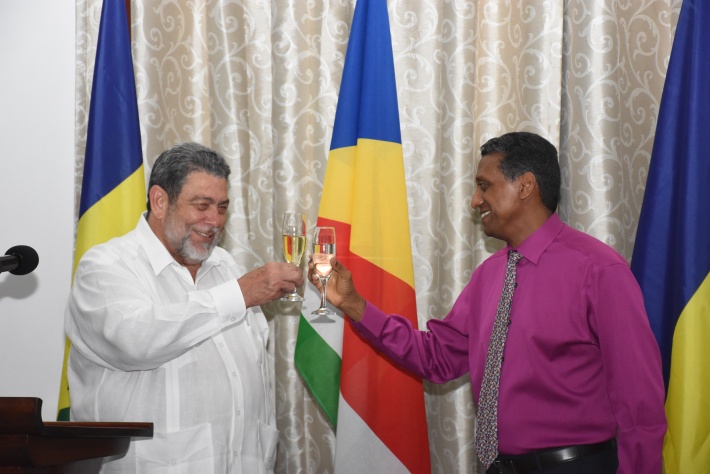 PM Gonsalves and President Faure proposing a toast during the banquet

‘Our island nations are linked by bonds of our shared history,’ says President Faure

“Our island nations, although oceans apart, are linked by the powerful bonds of our shared history, our common language, and our strong cultural links.”

President Danny Faure said this in his speech during the banquet he hosted at State House on Friday in honour of the Prime Minister of St Vincent and the Grenadines, Dr Ralph Gonsalves who was the guest of honour for the country’s 43rd Independence Day and National Day celebrations.

“Your presence here today is a true testimony of the warm friendship between our nations, and we wish to thank you most sincerely for accepting our invitation to attend this year’s National Day celebrations as our guest of honour. Seychelles and St. Vincent and the Grenadines are guided by the same values, deeply committed to democracy, the rule of law, peace, and shared prosperity for our people. Moreover, as small island developing states, we share the conviction that the natural beauty and environment of our countries are not gifts to be taken for granted, but precious resources that must be protected,” President Faure added.

President Faure emphasised on how Seychelles regards St Vincent and the Grenadines as a great partner in our efforts to bring to the forefront of all global dialogues the challenges faced by small island nations. These include the urgent need for climate action, environmental conservation, and greater multilateralism.

“We are convinced that through our continued engagements our countries will build upon firm foundations in areas such as sustainable development, climate resilience, blue economy, and cultural preservation,” noted President Faure.

He seized the opportunity to congratulate PM Gonsalves on his country’s election as the smallest nation ever to occupy a non-permanent seat on the United Nations Security Council. “This is a milestone achievement not only for St Vincent and Grenadines, but for small island developing states (Sids) all over the world. It is a tremendous example of the leadership of Sids, and our presence on the world stage. I would like to reiterate the commitment of Seychelles to deepening our bonds of friendship and bilateral relations with St Vincent and the Grenadines. We are determined to elevate our cooperation to the highest level, through exchanges of expertise, through people-to-people connections, through continuous dialogue and, more importantly, through working on common platforms to foster global solidarity on matters of critical importance,” he said.

For his part, PM Gonsalves talked about the commonalities that exist between the two countries and people.

“Islands are peculiar entities under one nation-state umbrella. In that context internally we have our roadmap laid out in the 17 sustainable development goals of the United Nations which we adopted in September 2015. You can twist them in or out. Almost everything that you do, you can adopt that as an appropriate framework. One of those goals enjoins us to have a partnership with other countries. It is important that the ground rules laid in the Charter of the United Nations such as quality of state, non-interference in internal affairs of other countries, engage in unilateralism, don't try to use force, and it is better for people to talk and resolve problems rather than fighting,” said PM Gonsalves.

At the end of his two-day visits to our islands, PM Gonsalves left the country yesterday morning. He was accompanied at the airport by Designated Minister Mondon, Minister Jean-Paul Adam, Ambassador Barry Faure, Russian Ambassador Vladimir Belous and Mohammed Afif, Secretary of State for Cabinet Affairs.

Speaking to the press, PM Gonsalves noted that he was very happy with his visit. “I enjoyed it very much. Last night (the national celebrations show) was splendid. I was very impressed by the young people with their skills and talents. And I understand a young person put the show together. I have to congratulate that individual. It was absolutely superb and I enjoyed Praslin.”

PM Gonsalves bid us farewell with the following word ‘Desperetequio’ which means ‘My spirit has reached out all to you, has received you and you sent it back to me out of recompense’. 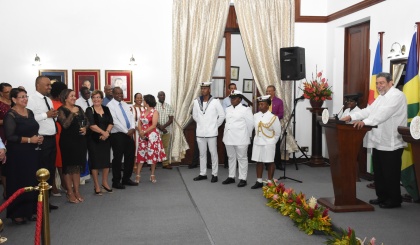