State visit of the Prime Minister of St. Vincent and the Grenadines, Dr Ralph Gonsalves |01 July 2019 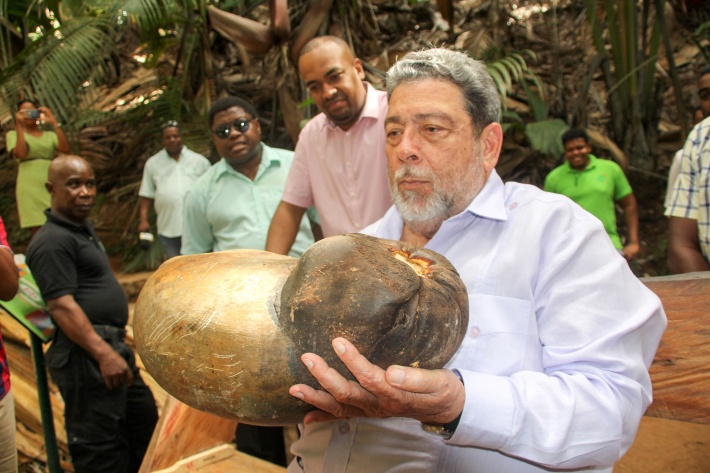 Invited to Seychelles as guest of honour for the country’s 43rd Independence Day anniversary and National Day celebrations, Prime Minister of St Vincent and the Grenadines, Dr Ralph E. Gonsalves described Seychelles as “one of the cleanest places I’ve ever been to in the world”.

PM Gonsalves arrived in the country on Friday morning on a two-day state visit and was welcomed on arrival by Designated Minister Macsuzy Mondon at the Seychelles International Airport. It was his first state visit in Seychelles.

Hours after his arrival into the country on Friday, PM Gonsalves was officially received at State House by President Danny Faure. It was his first state visit in Seychelles.

After which the Vincentian prime minister was invited to inspect the guard of honour and was introduced to the cabinet of ministers.

Prime Minister Gonsalves and President Faure then proceeded for a tête-à-tête.

Both countries are considered as small island developing states and consequently have many topical issues in common such as tourism, environment and the blue economy.

Like most country leaders on state visits in Seychelles, Prime Minister Gonsalves planted a coco de mer seed in honour of his visit.

He was accompanied on his state visit by the Minister Counsellor of the High Commission of St Vincent and the Grenadines to London, Jinelle Adams.

He was welcomed by a line-up of Seychelles Islands Foundation (SIF) staff and senior visitor attendant Missia Dubignon guided him on a tour of the garden.

As is the tradition, PM Gonsalves had the chance to guess the weight of a 14.9kg coco de mer and he then observed its de-husking. Dr Gonsalves was accompanied by Ms Adams, Minister Cosgrow, secretary of state for foreign affairs and the blue economy Barry Faure, members of the National Assembly Churchill Gill and Wavel Woodcock and district administrators on Praslin.

The prime minister was then presented with three books about the Vallée de Mai and its endemic species by Minister Cosgrow before he signed the visitors’ book.

At the end of the visit, PM Gonsalves expressed his amazement about the beauty of the Vallée de Mai. “This is an extraordinary work of nature. I’ve never been to anything like this. I have travelled all over the world but this one has a uniqueness. The beauty of the palms, its magnificence and the coco de mer is simply unique. And the hills are really joyful together. The garden is very well kept, the staff are doing a very good job. In fact, Seychelles is really one of the cleanest places I’ve ever been to in the world. You clearly spend a lot of time on the environment, a lot of resources and the government and people are to be commended,” said PM Gonsalves.

He urged the people of Seychelles to keep up their efforts in keeping the country clean. “We have a lot of barbarians who would like to spoil all of this greenery but we have to keep them away, especially now in this era which is sensitive to climate change. We have to ensure that we protect what we have for our great grandchildren. At the end of the day this is what the people of Seychelles call their home,” PM Gonsalves shared.

Dr Gonsalves also shared that St Vincent and the Grenadines, which is a 32 island archipelago, has many similarities to Seychelles, but he was nonetheless impressed by the immense warmth with which he was received.

“Our countries share an excellent diplomatic relationship and we share common positions on a range of issues in the global political economy such as matters relating to climate change, adaptation and mitigation, fair trade, and sustainable development. We are grateful to the support of the Seychelles in our run for the United Nation’s Security Council where we were recently elected, and we are the smallest country ever to do so. This is a tremendous honour for us as a small island developing state. And of course not only for us, but for all of us. As such, one of our priorities would be to address the security issue of climate change and make sure we have global peace, shared prosperity, peace and security for all of us so that we can live well,” added PM Gonsalves who also visited the Côte d’Or beach where he was again mesmerised by its amazing natural beauty as he interacted with tourists visiting Praslin. 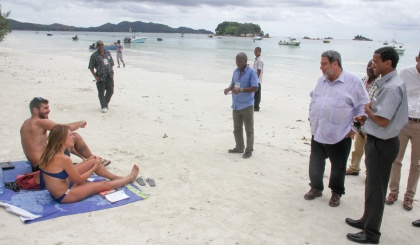 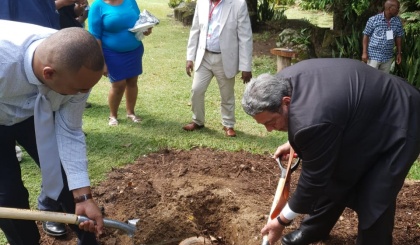 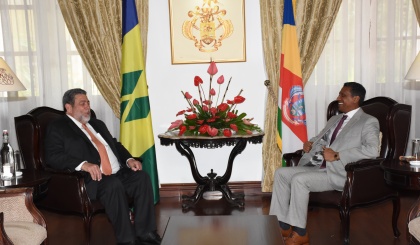 PM Gonsalves during his tête à tête with President Faure 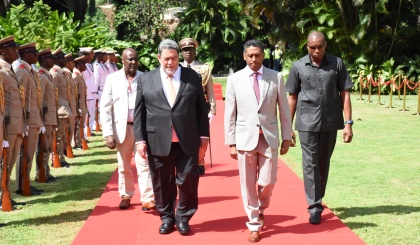