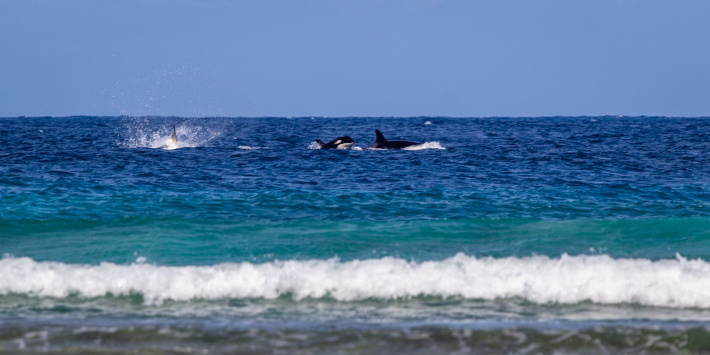 A fourth Orca sighting has been recorded on the Aldabra Atoll, the Seychelles Islands Foundation (SIF) has revealed.

At approximately 10am on Tuesday August 4, a SIF ranger based on Aldabra Atoll was finishing a cup of tea before returning to work when he spotted a dark movement in the water along the edge of the reef flat. To his surprise, he saw a very large black dorsal fin emerge from the water, then another and another. The thought process led to orcas (Orcinus orca), but with orca sightings being so rare in the tropics there was a great deal of initial disbelief that there could be an entire pod!? The ranger called another person and soon sure enough they confirmed it to be a pod of orcas right off the reef opposite the Aldabra research station! This is spectacular because looking at SIF’s records, this is only the fourth time since 2001 that orcas have been spotted around Aldabra’s waters.

The pair ran to the office block screaming as they went, “orcas! Tou dimoun i annan orcas, killer whales, get sa orcas!”. Soon the whole research team had binoculars and telescopes out watching the pod. They then ran the length of settlement beach (Aldabra’s longest beach) to get the island manager and the logistics team who were repairing a house. The whole SIF team then watched in awe as around ten orcas swam along the edge of the reef for nearly two hours. Two large males were spotted, distinguishable by their extremely large dorsal fins, plus there were several females, a few juveniles and what looked like a small calf. The two males did not hang around long, but the smaller females and juveniles kept circling around and stayed in front of the reef. It was unclear whether they were resting or fishing. Several frigate birds and boobies circled above them for some time though, suggesting that they may have been driving fish towards the surface as they hunted.

After watching from shore for around half an hour, several of the Aldabra team walked out over the reef flat, avoiding black-tip reef sharks as they went, so that they could get a closer view of the orcas. They were not disappointed. A calf breached several times and a few of the orcas appeared to also try and have a look at the strange collection of humans in the shallows sticking their head and bodies straight out of the water. Then another began to slap its tail against the water, repeating this several times as the Aldabra residents looked on in amazement. This display continued for another hour or so, with one brave ranger wading into the waves in order to get some photos to share this beautiful and race encounter with the rest of the Seychelles.

Overall, it was a timely reminder of Aldabra’s magic and the richness of Seychelles’ waters. With all these amazing creatures inhabiting our seas we must not forget that this is not a human world, but rather one we share with many creatures that deserve our respect and protection: not only of them but their food source and habitats also. There is so much out there that we are unaware of, so moments like these must be treasured and enjoyed. The two hours the Aldabra team shared with this pod of orcas are etched in their memories and we hope through this story we can share some of the magic of that moment!