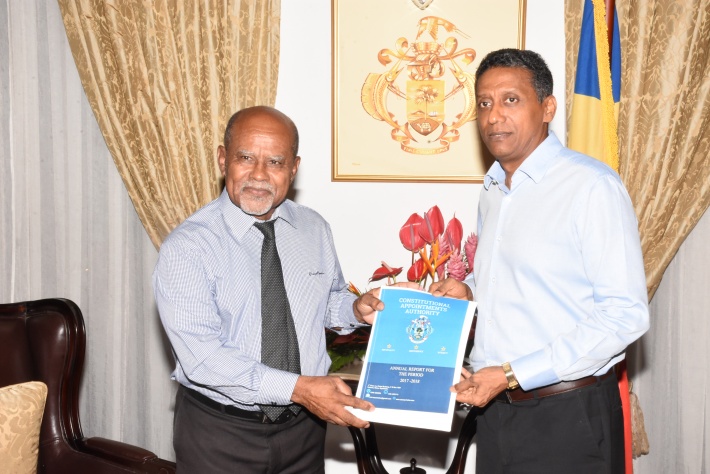 Mr Felix presents a copy of the report to President Faure

A report of the work of the new team of the Constitutional Appointments Authority for the past two years 2017-2018 was presented to President Danny Faure at State House yesterday morning.

“A very detailed report about each interviewee is sent to the president so he knows everybody and he is free to accept or not any of the interviewees when the recommendations are made,” Mr Felix stressed.

Mr Felix pointed out that the CAA is in general satisfied with its work over the past two years noting that so far all the candidates recommended by the CAA have been accepted.

“Overall the CAA is satisfied that all the candidates it has recommended for appointment in different positions have been accepted and are doing a good job,” said Mr Felix.

But he said there is a need for more public awareness on the work of the CAA which include other than recommending candidates for various positions receiving public complaints and assessing them before deciding to appoint a tribunal to carry out further investigations if necessary as the CAA is not mandated to carry out any investigation. Mr Felix went on to detail the different awareness initiatives that the CAA carries out and added that through its website can be accessed at http://www.caaseychelles.com

Mr Felix said the CAA is encouraged by the president’s support and encouragement of its work.

Other than Mr Felix the other members of the CAA are Simone de Commarmond, Annette Georges, Marie Nella Azemia and Willy Confait.

President commends firefighters for their bravery in ammonia leak rescue   |12.08.2022