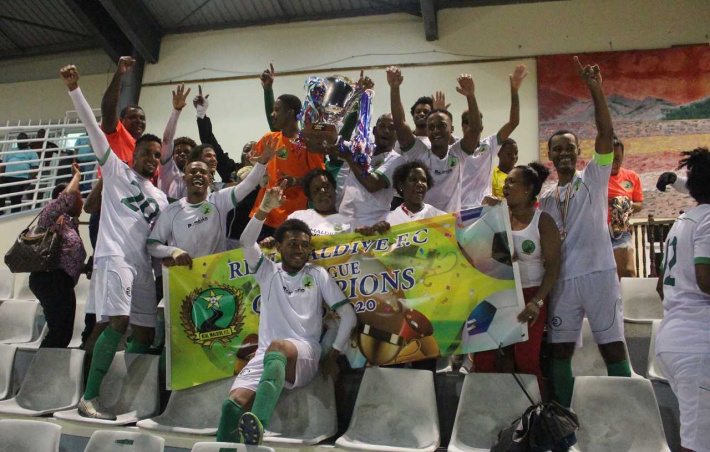 Championship One League champions Real Maldives have been reprieved of any wrongdoings by the Seychelles Football Federation’s independent disciplinary committee in its long-awaited ruling which was released on Tuesday afternoon.

Sports NATION received a copy of the ruling where the disciplinary committee states the case which was brought to the attention of the Seychelles Football Federation (SFF) regarding the fielding of a non-Seychellois footballer who plays for Real Maldives.

The complaint was raised as the player in question, Malagasy Asman Todisoa, was alleged to have featured in two matches in December 2019 without a valid gainful occupation permit (GOP) which was in breach of the SFF regulations.

However, the disciplinary committee headed by Olivier Chang-Leng and assisted by Roch Henriette and Wilbert Omath, found out that Todisoa had played without a valid GOP or passport which had expired on November 10, 2019.

But the committee recognised in their ruling that Real Maldives had applied for an extension to the player’s GOP on November 5, 2019 from the immigration office, SFF and National Sports Council.

The ruling goes on to show that the player and his club based in Anse Etoile had gone through great lengths to have the player’s passport renewed where the player was even interviewed by the committee.

Nonetheless, the disciplinary committee based their judgment on the fact that St John Bosco’s complaint did not follow the procedure of a real complaint where it should be lodged within seven days of the incident accompanied by a complaint fee which all was not respected according to the report.

In fact, the committee states that the alleged incident of playing without a GOP by Todisoa occurred in December 2019 but St John Bosco only brought this matter to the attention of the SFF director of competition on July 21, 2020.

As a result, the disciplinary committee states that “there are several issues with the complaint made by St John Bosco FC. Firstly, it is arguable as to whether it can even be considered a complainant under the regulation. Furthermore to the above, even if it were possible to cure the practical and administrative defects with the complainant, the complaint is undoubtedly time barred in that it failed to bring the complaint within the required time limit that the incident occurred”.

As a result, the committee claims that “in light of the issues with the complaint, none more so than the failure to bring it within seven days of the incidents which gave rise to it, the committee has no choice but to dismiss this complaint for its failure to comply with the regulations 15.A b) and c) in line with regulation 15.a f).

Sports NATION spoke to Real Maldives coach Don Anacoura who was ecstatic as well as relieved with the committee’s ruling.

“We are very happy with this decision as it shows that all our hard work has not gone to waste and we always knew that we had not done anything wrong and were confident to win this long running battle and now we have conquered over our opponents on two occasions ‒ both on the pitch and off the field. We can prepare for the new season and we will be organising our end-of-year gathering soon where we can celebrate with a peace of mind,” the Real Maldives coach revealed.

As for St John Bosco FC manager Jude Edmond, he was as expected disappointed with the outcome of this matter.

“We feel there has been no justice in this ruling as they are making this decision solely on the fact that we did not lodge a complaint within seven days but it was not possible for us to get such information on player GOP from the federation. It is obvious that the committee realised that the player under investigation did not have a valid GOP and we feel therefore it is the duty of the federation to take action not because we brought this complaint but more so because there was a clear breach of the regulations regarding GOP. Therefore, we will meet with our club committee and decide on our next course of action in this very unjust and unfair ruling,” the St John Bosco manager related to Sport NATION.