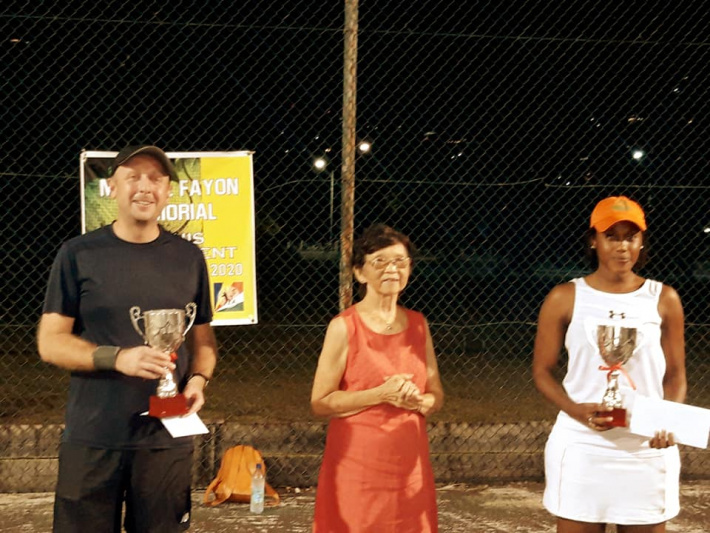 Reining tennis man of the year Damien Laporte and veteran female player Sarah Rene are the grand winners of the singles events of the Marcel Fayon Memorial Tennis Tournament, while the duo of Oliver Gossage and Zenab Kanté took home the mixed doubles title.

A total of 43 players ‒ 28 males and 15 females ‒ registered for the tournament which was played over two weekends, with the finals taking place last Sunday at the Roche Caïman tennis courts.

In the men’s singles competition, Laporte won a bye in the first round before eliminating Gonzalo Macho 2-0 (6-0, 6-0) in the second.

In the quarterfinal, Laporte was up against Dan Fu and once again the member of the Academia Sánchez-Casal in Spain imposed his superiority, whitewashing Fu 2-0. The set scores were 6-0 and 6-3.

In the semifinal, Laporte met Johan Fu and another straight sets 2-0 (6-2, 6-0) victory saw him book a place in the final where he met his old time partner Shaun Andriamaro.

Andriamaro also began his road to the final with a first-round bye, before eliminating Christian Payet 2-0 (6-3, 6-4) in the second round.

In the quarterfinal, Andriamaro faced Howard Whailey who was not a tough opponent as he managed to glide through, winning the match 2-0 (6-1, 6-0), booking his semifinal spot against Matteo Lavigne. The semifinal match was another formality for Andriamaro who easily beat Lavigne 2-0 (6-2, 6-3) to book his spot in the final.

In the final against his old buddy Laporte, it was clear that Andriamaro was not in the same class as his opponent. Laporte easily beat Andriamaro 2-0 to win the Marcel Fayon Memorial men’s singles title.

In the women’s singles competition, veteran player Sarah Rene did not have to sweat her way to the semifinal after registering two walkovers in the qualifiers.

In the first round she walked over Ashaelle Bastienne, before collecting another victory over Jelena Galusko by walk-over in the quarterfinal. In the semifinal, she eliminated Alisha Sharma 2-0.

Her opponent in the final was Clyvie Hoareau who also stated the competition with a walkover against Lineda Samson, before eliminating Thara Hoareau 2-0 (6-4, 6-4).

In the semifinal, her opponent was Shirley Yu and once again, Hoareau registered a straight sets 2-0 win to book her place in the final.

Despite their age difference, a much older Rene imposed her dominance over Hoareau in the final match to win 2-0 (6-1, 6-1).

In the mixed-doubles competition, Gossage and Kanté began their journey with a bye in the first round, before eliminating Yannick Fock-Tave and Alisha Sharma 2-0 (6-2, 6-4) in the second round.

In the quarterfinal, their opponents were Clyvie Hoareau and Makhan Bristol and once again the Gossage and Kanté duo were invincible, eliminating their opponents 2-0 to book their spot in the semifinal against Thara Hoareau and Henk Nel. The set scores were 6-1 and 6-2.

In the semifinal, Gossage and Kanté had to dig into their reserves against Hoareau and Nel who managed to grab a set in the match for a 2-1 finish. The set scores were 6-4, 1-6 and 7-5.

The next pair to reach the final was made up of Matteo Lavigne and Shirley Yu who after winning the first round bye, walked over Ashaelle Bastienne and Mike Fayon in the second round.

After losing the first set 6-7 in the final, Gossage and Kanté redeemed themselves in the second and third sets which they won 6-3 and 6-4 respectively to win the mixed doubles title on a 2-1 score.

The competition’s sponsor Julie Fayon had the honour of presenting the prizes along with her son Dr Mike Fayon and her daughter-in-law Guylaine Fayon.

The Seychelles Tennis Association (STA) would like to express its sincere appreciation to Mrs Fayon who is a great model and inspiration to Seychelles’ tennis. 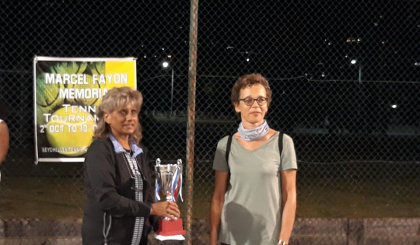 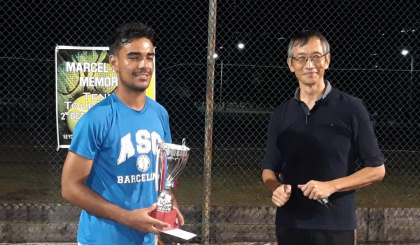