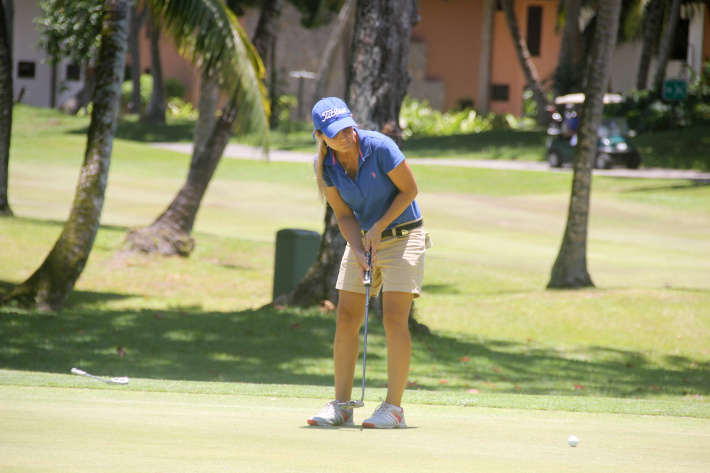 Praslin’s promising and competitive golfer Sylvie Hattingh is the winner of the fifth ISPC Masters golf tournament, played over the weekend at the luxury five-star Constance Lemuria Resort golf course on Praslin.

This year’s tournament was a completely different from the previous and it was full of surprises and focused on a charitable aspect. The two-day tournament was accompanied by a fundraising auction sale on Saturday evening. Proceeds from the fundraiser shall go towards frontline workers fighting the Covid-19 pandemic.

“The tournament is usually held over one day and the players are invited to take part. This year, we decided to hold it over two days and players got to spend a wonderful weekend at the luxury Constance Lemuria Resort. This is a way for us to bring our support to Constance Lemuria Resort, one of our partners, during this very difficult time when the tourism industry is struggling,” shared Alfred Fourcroy, chief executive of ISPC.

The 50 golfers who took part in the fifth ISPC Master golf tournament qualified for the event following qualifying rounds earlier this year contested by 120 golfers. The experience and joyous atmosphere which is usually the highlight of the event was especially cherished in this tournament as all players came together for a great cause. This was especially felt in Saturday night’s fundraiser auction sale which yielded a total of R110,000.

Mr Fourcroy expressed ISPC’s appreciation of the golfers’ involvement in the event as well as the enthusiasm shown.

“We are amazed by the outstanding performance of our winner, especially as the first female winner and also at the general participation and responsiveness of all the participants who helped us make this event a success,” he said.

The tournament and related activities all took place under strict health protocols. “We hope to encourage everyone to make this ‘new normal’ normal, to look ahead positively with a sense of normality,” stated Mr Fourcroy.

The 50 golfers teed off on Saturday morning by groups of four players under a very hot sun. At the end of play on day one, Praslin’s promising and competitive golfer Sylvie Hattingh was leading the pack with a total score of 42 followed by Annie Creane and Arnaud Martin both with a score of 33.

Mrs Hattingh maintained her good form on Sunday with a score of 40 which was enough for her to win the ISPC Masters Jacket with a total score of 82. She became the first female winner of the blue jacket.

With a score of 34 on Sunday, Arnaud Martin improved his ranking to finish second with a total score to 67.

Experienced golfer Godfroy Andrade managed to finish the day with a score of 30 and 60 in total to climb into third place.

Seychellois professional golfer William Weidner also took part in the tournament and managed a total score of 69 (36 on Saturday and 33 on Sunday).

The tournament was played using Individual Stableford format and the winners winning on net scores.

After wearing the ISPC Masters jacket for the first time, Hattingh had this to say: “The tournament which came as a breath of fresh air was a great initiative to bring the golfer community together to mingle and have fun. It came at a great time as I believe that Covid-19 has swallowed us in and kept us so impersonal and tied up to the new normal. After the first round I was in a good position, I still had another day to play and I know it could have gone either way. Luckily I played consistently on Sunday as well. I never believed in the existence of the ISPC Masters ever to be a female winner, I was surprised myself. I hope that my win will encourage other female (young and old) to get involved in golf especially those on Praslin given that we have such an amazing golf course.”

To end Hattingh was very thankful to ISPC and Constance Lemuria for organising such an amazing tournament which was loved by all the golfers as it allowed them to get out and socialise all in the name of golf.

On his part Constance Lemuria’s golf manager Gary Pouponneau expressed his satisfaction with the way the tournament went.

“It was a great tournament, the level of golf especially on Saturday was superb. The golfers were very competitive. Sylvie (Hatting) played very well to be the ISPC Masters’ first female champion.” 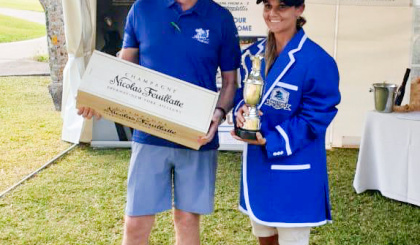