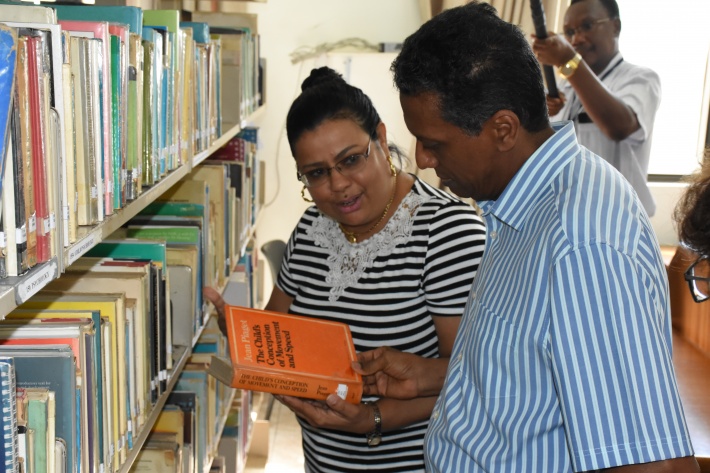 To recruit quality and quantity of students for teacher training is one among the few challenges being faced by the Seychelles Institute for Teacher Training (SITE).

It was the director of SITE, Rosianna Jules, who said this to the press after having held discussions on the matter with President Danny Faure who was conducting a familiarisation visit to the institution. Present also in the meeting was the chairman of SITE, Georges Tirant, and other senior management staff.

Mrs Jules said that they discussed on a possible national campaign involving all partners and stakeholders at all level of society joining together to promote the teaching profession.

She noted that President Faure was saddened by the fact that there are only three males on training to become teachers.

Mrs Jules further said that President Faure discussed with them on ways through their strategic plan to possibly attract male candidates as well as advanced level students to the teaching profession.

Another challenge discussed during the meeting was the cut in budget for SITE which Mrs Jules said was affecting the implementation of some of its programmes.

She also said that the structural changes implemented by the Ministry of Education and Human Resource Development has also affected the teaching staff and supporting staff in terms of compensation for long years of service.

She said that this concern was also a topic of discussion with President Faure.

The aim of the visit yesterday morning was for President Faure to get an insight into what is happening at the teacher learning institution in terms of successes and challenges and also to interact with the management, staff as well as students.

President Faure was met on arrival by Mr Tirant and Mrs Jules and was guided on a tour of the two-storey institution. The visit started at the resource room housing text books and other research materials followed by the computer room and the IT technician room on the ground floor.

Other places visited on the ground floor were house-keeping, the newly introduced early childhood room, student support and the library.

On the second floor President Faure visited the administrative office, the accounts section, the laboratory room, the art room and the staff room for the technology, art and language lecturers.

On the second floor he visited the staff room for social science and maths lecturers.

During his tour President Faure interacted with staff and students while also observing class sessions in five class rooms. Some students were not present as they were doing teaching practice in other schools while some other teachers were making visits.

President Faure later met the chairman and senior management staff in a meeting. Following the meeting the director, Mrs Jules, said she was happy that President Faure came to visit SITE as it has given the staff and students the opportunity to meet and hold discussions with him.

SITE has 24 lecturers including directors and seven supporting staff. There are 106 students on full time Diploma courses of whom only 3 are males. It also has 179 teachers following training through blended learning mode in Diploma, Advance and Advance Diploma level.

The accompanying photos show some highlights of President Faure’s visit to SITE.