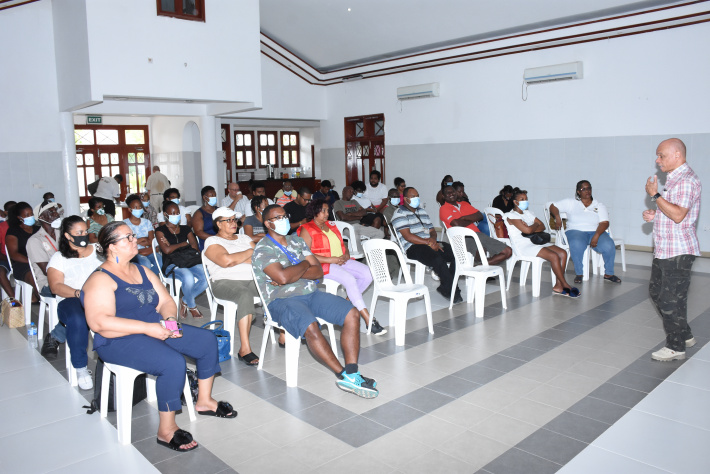 In preparation for the upcoming general elections this week from October 22-24, the Red Cross Society of Seychelles in collaboration with the Department of Risk and Disaster Management (DRDM) on Saturday organised a pre-election training.

For the purpose of social distancing, the training at the Roche Caiman district administration was divided into two separate sessions; one in the morning and another in the afternoon.

The trainees in the Saturday sessions were briefed on the potential situations they could be faced with during the election proceedings, personal security and review of first aid.

Meanwhile DRDM will be responsible for the logistical support since it is mandated to overlook these types of mass national events.

A total of three Red Cross Society of Seychelles (RCSS) volunteers will be placed at each polling station, one of which will be designated as team leader. Only the team leader will be responsible to liaise with the chief polling officer.

On hand the RCSS volunteers will be equipped with face masks stocks, first aid equipment and ice among others to ensure the safety and security of the voters and polling officers.

RCSS and DRDM are also hoping to acquire a designated first aid station in one of the rooms at the polling stations.

Principal secretary for DRDM, Paul Labeleine, said: “This election operation is being manned through a partnership between RCSS and DRDM – a partnership which was strengthened during the landfill fire. DRDM does not have enough manpower so we sought the assistance of the RCSS and its volunteers who have been trained for these situations.”

“It is the first time that an election is held during a pandemic. We are working together to ensure that the election runs smoothly and public health measures are observed. DRDM is also partnering with other agencies,” he added.

“Each time there is an election the RCSS is called on to provide assistance, but most times we do not go on the field and keep a team on standby instead. This time around however the situation is different with Covid-19 and so in this presidential and parliamentary elections, Red Cross will actually be present at the polling stations,” explained RCSS secretary general, Marie-May Bastienne.

“Ideally we would have preferred to place more volunteers in the larger stations but this is not possible due to the limited number of volunteers. Some of our volunteers who are police officers, fire and rescue services and health workers will be working during the elections. It is a constraint for us but at least we have three volunteers per district.”

RCSS has around 90 volunteers who will be participating in the elections and, as such, they will be able to vote early on Thursday, October 22 along with voters working in essential services.

“We will not focus much on social distancing since everyone should be wearing a mask when entering the polling station,” further provided Mrs Bastienne.

“Focus will be in verifying whether people’s face masks are not getting damp, and if so they will have to remove and change them. Given that people will be wearing masks and standing for some while in the heat, we will have to look out for those who are feeling unwell or fainting.”

“Additionally, our role will be to ensure that the polling station is constantly being sanitized.”

“DRDM will provision equipment such as ice box for us, meals and water for our volunteers will be provided by the Electoral Commission. As for transportation, RCSS had been unlucky in the fact that both our vehicles coincidentally are giving us some trouble so we are acquiring additional transportation, and the volunteers who have their own vehicles will be provided with fuel to collect and drive back the other volunteers from their homes,” said Mrs Bastienne.

As for the wellbeing of the Electoral Commission staff, Mrs Bastienne said: “Even the electoral officers will have to take a breather every now and then to remove their masks and breathe freely. This would be easier for them to be able to last throughout the day, especially those with underlying health problems such as asthma.”

Voting on the main election date, October 22, will stretch from 7am to 7pm.

Once voting ends, RCSS volunteers have been advised to head directly home where they will remain on standby.

Aside from the hectic election itself, RCSS volunteers and DRDM staff will also remain alert during the post-election celebrations and subsequent days.