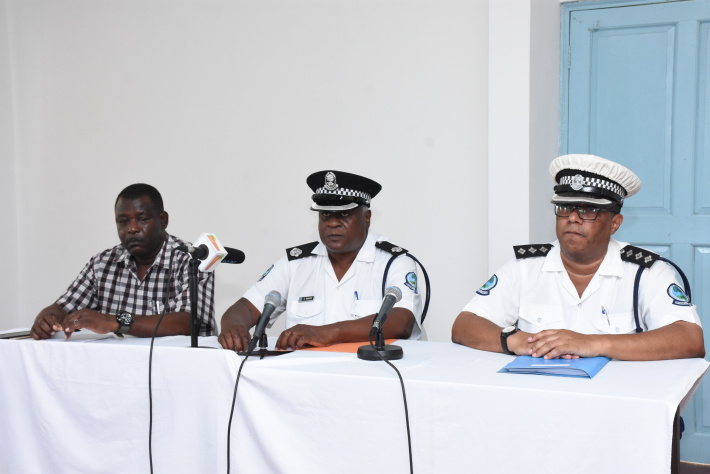 For the presidential and legislative elections which begin today, the Seychelles police force has taken some new measures to ensure the smooth running of the process, as well as to strengthen regulations, law and order which are crucial elements during such period.

The police election secretariat which is chaired by superintendent (SP) Ronnie Mousbé is an initiative of the commissioner of police Kishnan Labonte, with aim to organise, execute and oversee all policing duties in relation to the election, including the pre- and post-functions in terms of resources and logistics.

In a press conference yesterday at the Seychelles Police Academy at Pointe Larue, SP Mousbé, accompanied by SP Justin Dogley and assistant superintendent (ASP) Antoine Denousse briefed the press on the role of the police, through the secretariat during the election period.

SP Mousbé explained that the police will work jointly alongside all its stakeholders, including the electoral commission, the department of health, the Seychelles Fire and Rescue Services Agency (SFRSA), the Seychelles Public Transport Corporation (SPTC), as well as all participating political parties, including their candidates.

He noted that they have also been in contact with international bodies, including the Southern African Development Community (SADC) and also other local groups such as the Citizens Democracy Watch Seychelles (CDWS).

As for the planning and execution of the policing work during the election, SP Mousbé explained that the new shift or timetable will not affect the normal schedule as it will involve personnel who are supposed to be off duty on the particular days.

He also explained that there will be personnel on standby in all regions to provide back-up if needed during the period as the force will mobilise all its resources.

At the polling stations, SP Mousbé explained that two services will be provided, precisely inside with the ballot boxes and outside the stations dealing with crowd control.

He also noted that gathering will be strictly prohibited, especially in the vicinity of the electoral commission office where the final election results will be given.

He advised everyone to go and cast their ballot early and to return home immediately after, avoiding gatherings.

As for celebrations after the final results, SP Mousbé said there has been no authorisation given to date for any rally, or motorcade by the police.

In terms of traffic control, ASP Denousse explained that there will be several road closures in town during the period, especially Palm Street which hosts the electoral commission headquarters and Fifth June Avenue which is right in front of the English River polling station which will also be used as special voting station today.

The Bel Eau road will be also partly controlled, while only vehicles with special given permission from the electoral commission will gain access through and at the polling stations.

When it comes to offences related to the election, SP Dogley explained that so far they have received 18 formal complaints, including property damages, illegal assemblies, defamation and illegal posters and banners among others.

He noted that so far, three cases have been dealt with and sent to the office of the Attorney General awaiting prosecution.

The police force is encouraging everyone to ensure the safety of their property during the election (when going to vote) and is encouraging anyone who notices suspicious people, or movement within the community to alert the police.