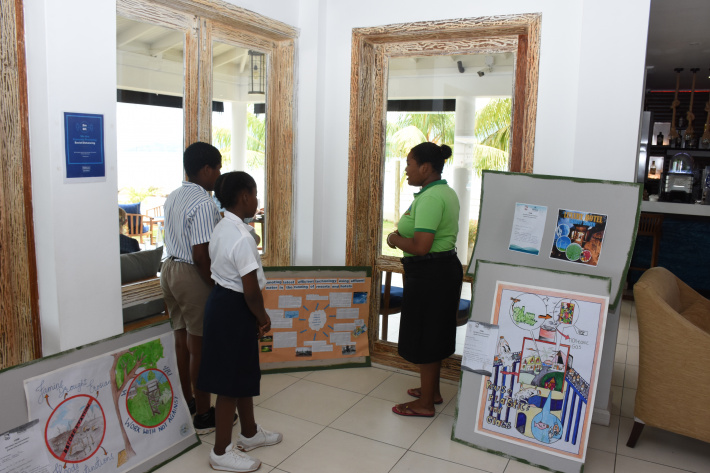 Some of the posters on display (Photo: Louis Toussaint)

Eighty students from five schools on Mahé took part in this year’s Big Green Draw competition under the theme ‘A climate of change’.

Their final product was displayed at the Eden Art space gallery recently.

All the projects were inspired by quotations from young Swedish environmental activist Greta Thumberg and each school chose a brief statement by her and illustrated that by having an outline of the quote and filling it with images which illustrate the message that we need to look after our environment.

These individual letters were then strung together to show the complete quotation and spread a powerful pro-environment message. The drawings are a combination of personal expression, response to the content of the quote, and the incorporation of images to support the bigger theme.

The five participating schools were Plaisance whose project was titled ‘Our house is on fire’, French with ‘the world is waking up’, International with ‘We are the change’, Independent with ‘Change is coming’ and Seychelles Institute of Art and Design (Siad) with ‘We Deserve a Safe Future’.

Speaking to the press, the chairman of Arterial Network, Martin Kennedy said this is the fourth time that that they have run the Big Draw event in Seychelles.

“In normal circumstances we would have the gallery full of students making their projects live and hanging them up as they do it, but due to the restrictions placed by the department of health this has not been possible,” he said

The students’ displays will be available for viewing for one week at the gallery for school and the general public, afterwards the work will go to the schools and will be added in the portfolio of the students.

Each participant will be given a certificate from Big Green Draw in England.

Jasmine Hoareau and Hellen Ma who were representing Siad said it took three days to make their projects and they used items in their school’s environment such as leaves and sea shells to illustrate their images.

They noted that they are happy with the end product but they confessed that it was a bit stressful as they had to use mostly black pen which left no room for errors.

“By doing this project we as future adults have decided to draw what we sensed about global warming. Thanks to this project we got the chance to learn more about climate change and discovered new talents at the school,” said Prathiksha Hemanth Kumar from Ecole Française.

She also added that the world is waking up to climate change and people are seeing the dangers of not taking care of the planet. 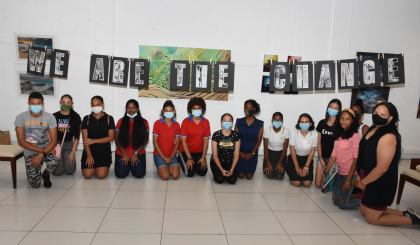