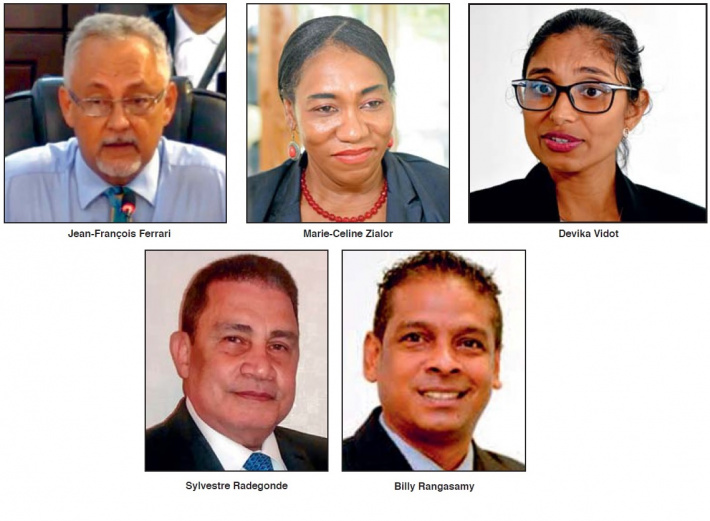 President Wavel Ramkalawan’s new administration is gearing to go as the National Assembly yesterday approved the appointments of the five remaining nominated ministers.

Now fully-fledged, the new cabinet is made up of a team of technicians and professionals.

Devika Vidot, 31, is the youngest minister in President Ramkalawan’s new administration and was the first nominee to be approved unanimously. Her academic background includes a degree in accounting and finance from the University of Manchester, as well as masters in professional accountancy. She has held positions primarily in the financial services industry and has gained some experience in auditing.

While she was in full-time employment, Mrs Vidot undertook her Association of Chartered Certified Accountants (ACCA) and “now I am a proud member of the ACCA and I inspire to become a fellow, and this will happen next year when I place my application”.

MNA Wavel Woodcock also noted that Mrs Vidot had been his lecturer at University of Seychelles (UniSey) in business administration.

In her responses to queries from the MNAs, Mrs Vidot noted that she strongly believes that the country needs to diversify its economy in order to gain additional streams of revenues.

“We all know that Seychelles is under scrutiny by the Organisation for Economic Co-operation and Development (OECD) and Seychelles has done a lot to meet the standards and we find that there are some deficiencies and room to improve.

“I have yet to know the portfolio I will be given but over the years I have been able to formulate some strategies that I feel will be better for the country. For example, I believe that there are some injustices against small island states that have offshore sectors. Some of these big countries are not really looking at their own domestic regulations but rather impose on smaller countries like us. There are contributions that we can put forward to better defend our country,” said Mrs Vidot.

Aside from her views on the financial sector, Mrs Vidot said that it was important for the country to develop activities that will encourage visitors to spend more, put more land and resources at the disposition of businesses and policies that will highlight the talents of youth’s entrepreneurship.

Impressed by her responses and strong character ‒ with Honourable Johan Lozé describing her as having an intellectual intelligence above par ‒ all 34 members of the National Assembly present in the chamber voted in favour of her nomination.

Marie-Celine Zialor, famous for her motivational talks and lectures, was appointed to the office of minister yesterday.

Mrs Zialor holds a diploma in applied biology from Australia and taught biology and chemistry in secondary schools before being promoted to deputy head teacher. She pursued an MBA in educational leadership before serving as head teacher in two schools.

Following her years in education, including at the Ministry of Education headquarters, Mrs Zialor moved to the then Seychelles Institute of Management (SIM) which later became The Guy Morel Institute (TGMI) in charge of the diploma courses in relations to management and entrepreneurship.

According to Mrs Zialor, her growing passion for human resource development led her to engage in coaching session and a motivational programme on radio.

Not one to mince words, Mrs Zialor described herself as “a frank person and a disruptor”.

During the question time yesterday, Mrs Zialor stressed that her observation has shown the country needs to strengthen the leadership skills of people in public service and better hone their skills.

She noted that leadership is different from management and public servants ought to be inspired and made to trust “that they can fly” so as to bring back trust in Seychellois.

“The country has a lot of qualified technicians […] but we must have work-life balance and manage performances…not be busy just for the sake of being busy. There are many good plans in the government that simply needs to be well implemented,” said Mrs Zialor.

Before her nomination was approved with 32 votes in favour, leader of government business Bernard Georges noted that Mrs Zialor’s uniqueness will only add to the cabinet of ministers, adding that she will be a motivational minister and provide her employees with an “exhilarated ride”.

The 60-year-old politician’s nomination as minister and designated minister proved to be more problematic than that of the 12 candidates who were presented to the National Assembly.

In fact, Mr Ferrari was the sole nominated minister to receive votes against his appointment. These votes were from leader of the opposition Sebastien Pillay and proportional member, Hon. Lozé.

Aside from his well-documented decades in the political sphere and staunch opponent of the previous government, Mr Ferrari has a background in sociology and political economy, a degree earned in Aix-en-Provence, France.

He spent two years as a staff training officer at the National Youth Service (NYS), and later undertook the United Nations economic programme in Nairobi. Mr Ferrari was the co-editor of the weekly Regar newspaper and his journey through politics led him to become a member of parliament with the then opposition (SNP and LDS).

Grilled by the now opposition, United Seychelles, Mr Ferrari acknowledged that he is a controversial persona but noted that he would not have achieved what he has today if he had not been controversial.

“[President Ramkalawan] and I were the voices of the voiceless and defenceless, this is why we had to speak out strongly. This is why it was important to have people like me,” explained Mr Ferrari.

Mr Ferrari added that he is conscious of the need to be less confrontational as he steps into the shoes of a minister.

Making good use of public money, justice and efficiency are some of the principles that Mr Ferrari said will guide him and the new government.

In response to Hon. Lozé’s query, Mr Ferrari said he does hold an Italian passport, noting that he inherited this nationality.

“I am a citizen of the world… I stayed in Seychelles, and I will remain here,” he added.

“The only real politician who will be entering President Ramkalawan’s cabinet will be me. This shows the confidence that has been placed for technicians and technocrats,” Mr Ferrari told the MNAs.

He stated that his contribution in the executive branch would be that of a mentor, someone who can bring people together.

As for his participation in the 1977 coup d’Etat, Mr Ferrari replied that he does not deny his past and has always regretted his family’s role in this.

“I was 17 then…and I have dedicated 43 years to undo the harm that I had helped create.”

Nonetheless this was not enough to sway all MNAs and his nomination was approved with 23 in favour, two against and seven abstentions.

Billy Rangasamy’s second go at ministerial nomination was well received by the seventh National Assembly which, for the second time yesterday, approved a candidature by unanimity.

To note, Mr Rangasamy was among the nominated ministers who former President Danny Faure presented to the National Assembly in 2018 but who were all rejected as LDS’ protest to urge President Faure to hold fresh elections.

Mr Rangasamy’s nomination was approved in absentia as he was in quarantine during yesterday’s National Assembly session.

An engineer by profession, practicing in the United Kingdom, Canada, the Gulf and Seychelles, Mr Rangasamy holds a Master of Science in concrete structures from Imperial College London University of London and Bachelor of Engineering in civil engineering (1st Class Honours Degree).

Again, Sylvestre Radegonde’s nomination was approved by unanimity yesterday even though the diplomat was not present for the vetting process.

Mr Radegonde was residing overseas before his new appointment as minister, serving as a Seychelles ambassador in France.

He has extensive experience in international relations, political affairs and diplomacy.

“Mr Radegonde brings the last touch to the beautiful team that will work together with the single aim of working for the Seychelles people,” Hon. Georges provided yesterday.

Motion to approve his appointment was approved with 30 votes in favour, none against or abstained.