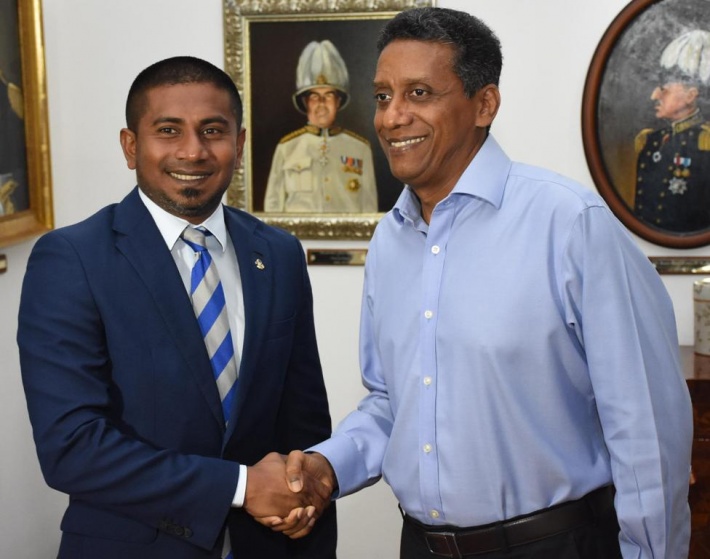 A delegation led by the Foreign Affairs Minister of the Maldives, Abdullah Shahidand and the Minister for Youth, Sports and Community Empowerment, Ahmed Mahloof called on President Danny Faure yesterday morning at State House to seek Seychelles’ support in their bid to host the 11th Indian Ocean Island Games in 2023.

“The Maldives is bidding for the 2023 Games and we are seeking the support of Seychelles,” said Minister Sahid in his interview with the press.

The minister noted that Maldives have participated in all ten games in the past and are very eager to return the hospitality that was accorded to them by the other Indian Ocean islands.

“The support we have received by President Faure is outstanding and we are very touched by this,” said Mr Shahid.

The Maldivian foreign minister noted that President Faure assisted them in 2004 when the tsunami struck Maldives, at that time President Faure was still the Youth Minister and he organised a Seychellois youth brigade to help and assist in cleaning up and repair the damage that the islands suffered.

“Both our countries are small island developing states and we face many similar issues such as environment, development and security issues, climate change which were also topics of discussions as President Faure is one of the most ardent advocators of climate change issues,” said Minister Shahid.

Apart from Seychelles the delegation will also be visiting the eight other island states within the region to seek their support as well.