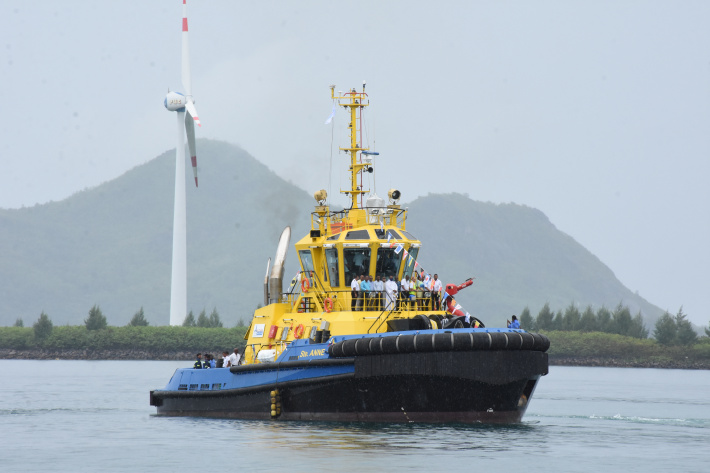 Guests are taken on a tour of the harbour onboard the new tugboat (Photo: Patrick Joubert)

Berthing and unberthing of vessels in Port Victoria will now be made easier with the acquisition by the Seychelles Port Authority (SPA) of a more powerful tugboat.

The vessel, named St Anne, was commissioned in a ceremony held at the New Port on Saturday morning in the presence of the President of the Republic of Seychelles, Wavel Ramkalawan; Vice-President Ahmed Afif; the Minister for Transport, Antony Derjacques; the Mayor of Victoria, David Andre; SPA board chairman, Paul Hodoul; the chief executive of SPA, Ronny Brutus; terminal operators; shipping agents; ship chandlers; SPA board members and staff, among other guests.

Also present were Father Brian Esther from the Anglican Church and Father John Ezenagu from the Catholic Church, who blessed the new tugboat after the hoisting onboard of our national flag and that of SPA.

The 28.57 metre vessel is a new 60 Bollard Pull Azimuth Stern Drive (ASD) Tug and is equipped with the latest seaworthy maritime technology.

With twice the power, it joins the fleet of SPA’s tugs, Rosemary, Alouette and Ascension.

Unfortunately, SPA technicians could not be mobilised to oversee the construction of the tug in Turkey in view of the Covid-19 pandemic and its associated travelling restrictions but a team did manage to visit the shipyard to oversee the final tests during the month of September 2020.

It was SPA staff, Maureen Barbier, who named the tugboat and had the honour of unveiling the name and christening the vessel.

In his speech for the occasion, Mr Brutus gave an overview on the tugs’ history service in Port Victoria since 1950 and reaffirmed SPA’s commitment to continuing to provide, develop and maintain a high standard of service in the region with regard to security and port facilities.

He said that with the acquisition of the more powerful Ste Anne, the port authority is in a better position to quickly address, more effectively, the maritime challenges in the port.

He referred as example, the incident where a cargo ship broke anchor and drifted off the Ile De Romainville early this year and where the two other tugs (Rosemary and Ascension) took one hour to steady the drifting ship.

He noted a lack of manpower to man the tugs and called on more youths to join the organisation, stressing that training will be provided.

Mr Brutus noted that St Anne will also allow SPA to conduct salvage and towage operations in the region. He said that SPA has been contacted on various occasions for such operations this year but could not do so as its biggest tugboat, Alouette, was undergoing maintenance in Mauritius, hence a loss in revenue.

He thanked all those who contributed to the development of Port Victoria and he also honoured the past harbour masters.

He said the tug’s name St Anne historically fits well in this day and era as it coincides with the 250th anniversary of the first settlement in Seychelles.

In his address President Ramkalawan congratulated SPA on the new acquisition. He noted that it will no doubt boost SPA’s capacity to extend its services being offered effectively.

He said that a dry dock is now needed as part of new developments, with regard to port services.

President Ramkalawan further said a dry dock service in Seychelles will be a project that his government will put a lot of emphasis on for it to materialise.

President Ramkalawan also highlighted the need for continued training of port personnel for their future development.

He stated he was very proud that SPA has acquired Ste Anne from its own funding and thanked the staff for the good work they are doing to keep our port on a high standard and for being well recognised.

He added that the government will give SPA its full support for its future development and capacity building.

Following a rescue of three young men at sea that same day, President Ramkalawan took the opportunity to commend the good working collaboration between SPA, the Seychelles Coast Guard and the Seychelles Air Force which have resulted in rescuing the three young fishermen.

President Ramkalawan and guests were invited on a tour on Ste Anne and while at sea, outside the harbour, tug master Dario Samedi provided his guests with an overview of the functions of the tug. 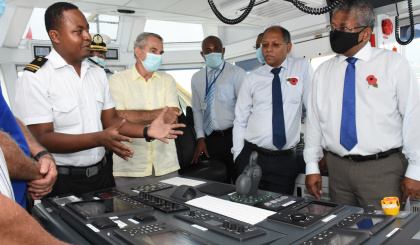 Tug master Dario Samedi providing his guests with an overview of the functions of the tug (Photo: Patrick Joubert) 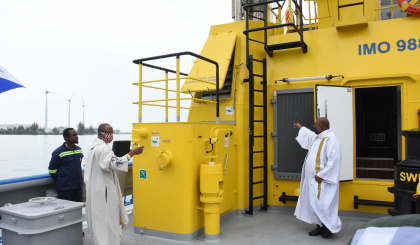