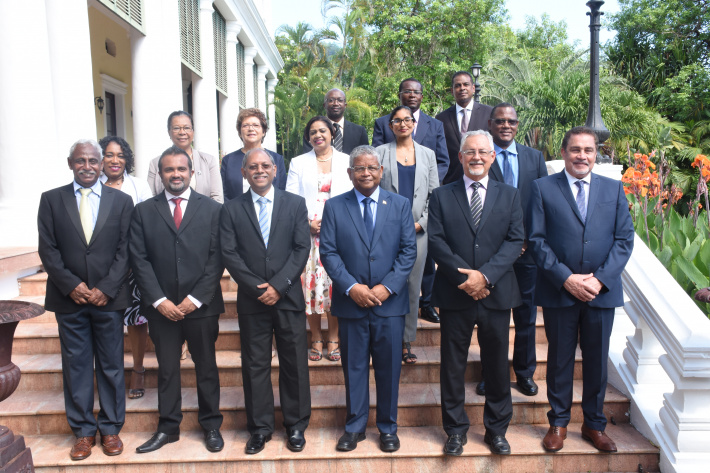 Two weeks following the induction of 11 new ministers, the Cabinet is finally complete with the swearing in of ministers Sylvestre Radegonde and Billy Rangasamy yesterday at State House.

Minister Radegonde will head the Ministry of Foreign Affairs and Tourism, while engineer turned minister, Rangasamy, has been appointed Minister for Lands and Housing.

Both coming in from overseas to take up their posts, the two ministers were under quarantine when the 11 other new ministers in the Cabinet took their oaths earlier this month, on November 3.

Minister Radegonde was first to take the oath of allegiance, official oath and oath to secrecy yesterday under the eye of President Wavel Ramkalawan and in the presence of his wife.

Minister Rangasamy followed suit, although his support system did not come in the form of his immediate family members ‒ since his wife and children are still abroad ‒ but rather his priest-friends.

“The team is complete,” declared President Ramkalawan after ministers Radegonde and Rangasamy took their oaths.

President Ramkalawan humorously noted that now complete, the 13-member Cabinet can finally take a photograph with all ministers present.

He vowed that the Cabinet will support the two newly sworn in ministers as they take up their posts and highlighted the “extraordinary team spirit” within the Cabinet.

“I would like to congratulate you [the Cabinet] for the work that you have been doing so far. I believe that our people understand that the motto ‘Seychelles for all of its children’ used in the campaign was not just a beautiful slogan. I want you to continue to treat each child of Seychelles with importance; continue to give the best of your abilities,” said President Ramkalawan.

Speaking of ministers Radegonde and Rangasamy, the president said he has no doubt of their competences and ability to discharge their responsibilities and serve the Seychellois public.

In addressing Minister Radegonde, President Ramkalawan said that the former has the huge responsibility to showcase Seychelles to the world through foreign affairs and tourism, and has also been doubly tasked with pulling the tourism industry back up from its knees and reinvigorate the economy.

As to Minister Rangasamy, President Ramkalawan acknowledged the challenges that await the new minister at Independence House.

“The ministry where you have been placed is one which has a lot of challenges. We know that land, housing and infrastructure are of high demand, and all of this will be under your responsibility. I am convinced that […] you will be up to the task.”

In an interview with the press, Minister Rangasamy said he had been excited to be nominated as minister but it was a decision that he had to first pray on.

“I always pray when I am taking my decisions, particularly serious ones like these,” said Minister Rangasamy.

When asked what he hopes to achieve at the Ministry of Lands and Housing, Minister Rangasamy noted that the ministry is long overdue for a change in public image.

“I would like to address the image of my ministry very seriously. It is a ministry dealing with a lot of public; everyone has their own problems, from housing to land to planning issues[…] we need to be able to manage people’s expectations however, with the compassion of our hearts, we need to give them the best service we can offer them.”

“On the physical side, we need to crack on and get projects moving as best as we can. We know that we have financial limitations, however where the money is there, where the grants are there we should not be sitting on these projects but making them happen,” added Minister Rangasamy.

Meanwhile Minister Radegonde, who said his nomination came as a welcoming surprise, brings a diplomatic career spanning over 25 years to the Ministry of Foreign Affairs and Tourism. He was also the first chief executive of the Seychelles Tourism Board (STB).

“I have a vast knowledge of the diplomatic world and I will not be doing this work alone ‒ we have a competent team here at Quéau de Quinssy and I am sure that I will receive their full cooperation,” Minister Radegonde said of the foreign affairs portfolio.

As for tourism, Minister Radegonde noted that his years living overseas ‒ with his most recent placement being in France, our main tourism market ‒ provides him with a great understanding of what tourists are in search of.

“We have to relook at our products over here; are we really offering value for money to the visitors? We are competing with other destinations, there has to be things that attract someone to choose Seychelles. Yes, we are beautiful ‒ beautiful beaches, sunshine, the environment is clean ‒ but is this enough today? There is quite a lot to do,” said Minister Radegonde.

Subsequent to the swearing in ceremony yesterday, the two ministers conducted separate familiarisation visits in their respective ministries.