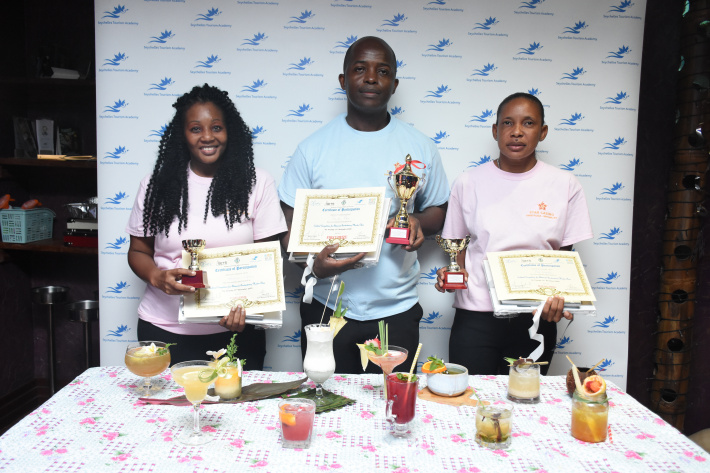 A group of cocktail enthusiasts got a chance to showcase their bartending skills Tuesday evening in a cocktail competition held at the Star Casino, Eden Island.

The competition was in collaboration with East Indies, The Providence Warehouse Company (PWC), in partnership with the Seychelles Hotel and Tourism Association (SHTA), the Seychelles Tourism Academy (STA) and Seychelles Employee Transition Scheme (Sets).

Participants – from Beginners to Advance – were required to create a signature cocktail and be able to interact with the audience while doing so.

This competition follows a week-long training facilitated by Oliver Deak, a UK based bartender and trainer of bartending services.

The participants in the beginners’ programme learned how to work behind the bar, how to open and close a bar, making drinks, serving, communicating with clients and hygiene, among other basic bartending skills.

Those participating in the advance classes learned more about the creation of special cocktails along with the accompanying fine dining cooking, how to create garnishes among others.

“I’m very proud of the participants as they demonstrated their skills and did an excellent job creating their cocktails,” said Mr Deak.

It was Maxime Louise, head of in-programme training at STA, Flavien Joubert, principal of STA and Oliver Deak who had the daunting task of tasting each cocktail and choosing a winner.

Each participant had five minutes to prepare their drink and after three hours of competition Franky Rose, a seasoned bartender, was declared the eventual winner with Elva Gamatis placed second and Mosianne Dugasse coming in third.

Speaking to Seychelles NATION after his win, Franky noted that his cocktail is aimed towards women.

“If you are a bartender you need to make cocktails that attract the attention of women as not many men will go for one,” he said.

Franky, who has been a bartender for 26 years, noted that he will add this cocktail to his menu following his win.

He continued by saying that the training they received the previous week was a boost to what they already knew about bartending since some of them had been in the business for years.

He added that Mr Deak also showed them how to make their own cocktail puree naturally instead of getting it from a bottle because when you make a cocktail from scratch the standard of the bartender becomes higher.

Mosianne Dugasse, who came in third, is new to the game of bartending and expressed her surprise for her placing in the competition.

The inspiration for her cocktail comes from our medicinal background where she incorporated ‘Gro bonm’ in her concoction.

“I was participating alongside seasoned bartenders so I’m very happy I was able to get third place,” she said.

“The barmen are the ones that push our brand in restaurants and bars so obviously when we were approached by Sets to sponsor the event we were happy to do so,” said Dorothy Asba, representative of East Indies.

She added that the bartenders who participated in the competition will now be a brand ambassador for East Indies. 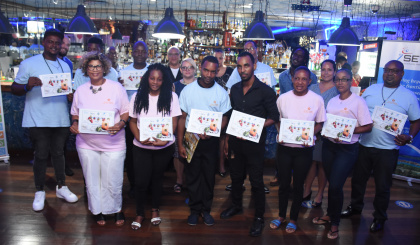 The participants in a souvenir photograph (Photo: Jude Morel)