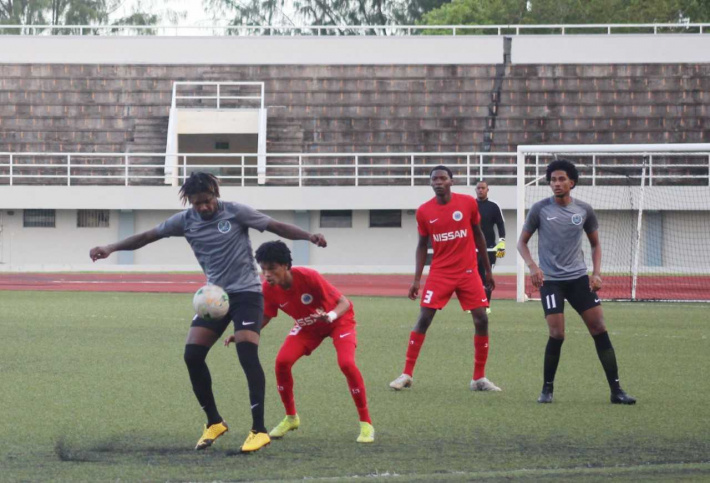 This match began with a minute’s silence in memory of the Argentine football legend and arguably the greatest ever player Diego Maradona who sadly passed away on Wednesday after suffering a cardiac arrest.

St John Bosco had the first chance in this encounter in the 14th minute from Denilson Rosette’s free kick which he lofted into the Northern Dynamo penalty area but both Jules Rapiera and Thierry Camille failed to guide the ball past goalkeeper Mario Banane.

However, Northern Dynamo had the clearest opportunity to break the deadlock just past the half hour mark from Francis Moumou’s ball down the line to Malagasy Rajamana who eluded defender Marchello Dufresne to set up Aldo Dufresne but he shot weakly at St John Bosco goalkeeper and captain Duane Romain who smothered the ball for a goalless first half.

Northern Dynamo were denied a decent penalty appeal in the 51st minute when St John Bosco defender, Malagasy Nassur Beanjara handled Dufresne’s low cross but referee Emile Fred turned a blind eye much to the frustration of the Dynamo players.

The two teams showed more intent to win all three points in this half and on the hour mark, Francis Moumou floated a free kick in the Bosco penalty where Gambian Musa Njie’s towering header sailed just inches over the crossbar.

Bosco were then gifted a clear chance in the 67th minute from Kelvin Cupidon’s long ball forward and Dynamo defender Dino Clarisse slipped under pressure from Deeroy Brutus who had only goalkeeper Banane to beat but his attempted lob was too weak and was saved by the Dynamo goalkeeper.

The players of coach Vivian Bothe had another gilt edge opportunity in the 79th minute from Brutus’ corner kick which fell to the unmarked Dean Balette but he guided his close range header over the crossbar.

In the 85th minute, Cupidon centred in a crowded penalty area and goalkeeper Banane lost the ball as he raced out to catch it. The ball dropped invitingly to Thierry Camille but the Dynamo goalkeper redeemed himself to collect Camille’s hooked shot to keep the score at 0-0 at the final whistle which satisfied both coaches when they spoke to Sports NATION.

“We were a bit nervous in the first half but the players grew in confidence as the minutes ticked away and we even had some good chances to win all three points though a draw is a satisfactory result,” St John Bosco coach Bothe told Sports NATION.

As for Northern Dynamo coach Bryan Bastienne, he felt the result was fair especially as his team had been out of action since March during the Covid-19 break and after which they opted to pull out of the remainder of the competition.

“The players were a bit rusty after being out of competitive football since March. Still we created some decent chances and were even denied a blatant penalty but overall we are pleased with a point,” the Dynamo coach said.