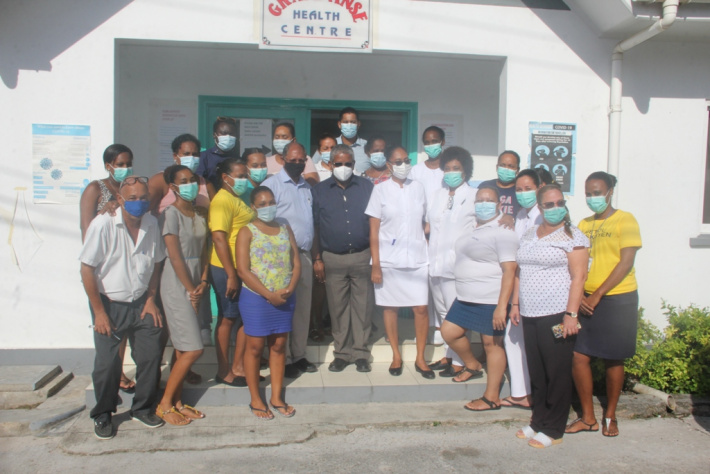 “Praslin has been neglected for far too long and we want to give her the importance she deserves,” President Wavel Ramkalawan said on Friday.

President Ramkalawan was speaking after heading a large delegation to the island to visit essential facilities, services, on-going developments and sites for various proposed projects.

He also had the chance to interact with staff and ordinary Praslinois.

He said he was very satisfied with the visit he made along with the delegation on the island.

“I am fully satisfied that I and all of the stakeholders now know the needs of the island and what remains is action,” President Ramkalawan said.

Upon being welcomed at the Baie St Anne Jetty by the district’s member of the National Assembly (MNA) Churchill Gill, MNA for Grand Anse Wavel Woodcock and proportional member Doyace Porice, President Ramkalawan, accompanied by Vice-President Ahmed Afif, ministers, principal secretaries, chief executives, deputy police commissioners and other technicians, first visited the jetty which will be turned into a yacht marina.

All ferry services and other boat charter services from the jetty will be moved to the new passenger jetty on Ile Eve, to make way for the start of the marina. The new passenger jetty, which was expected to be operational by 2023, will now be ready sooner, by middle January 2021, to make use of the finished phase (1) of the project after a decision taken to surface a temporary road with access parking area and including the construction a small temporary cafeteria for the use of the facility, while the project awaits further development in terms of a restaurant, commercial and office buildings, including a residential quarters among other developments.

Vendors who are selling their products at the road junction leading to the passenger jetty will be moved further inland to avoid traffic congestion on the main road.

President Ramkalawan and his delegation also visited the cargo port opposite the new jetty on Ile Eve where some cold storages are expected to be constructed along with a container bay and additional storage facilities for boat owners. The surrounding area will also be surfaced.

At the Eve Fire Station, President Ramkalawan, who was introduced to the fire fighters present, learned that the station was encountering staffing problems, flooding of the area during heavy rains, unavailability of street lights near the station, upgrading of firefighting equipment, lack of fire hydrants on Praslin in general and also that Ile Eve has only one entrance which may not be helpful in the event of a fire or other disasters.

He also learned that firefighters were in need of residential quarters for their visiting relatives, including a gymnasium for the officers to train, all of which will be taken care of among other issues.

Due to the availability of space, it has been proposed to use the Praslin Fire Station as a training ground for firefighting in Seychelles.

President Ramkalawan was not very happy with the state of the only red meat abattoir on Praslin. The once fully equipped abattoir was sold by government to a private individual and somehow it went idle and is in a very bad state with no equipment inside. Government had to buy back the abattoir at a more expensive price than previously sold and it is now under renovation while it waits for refurbishment through a €1.8 million grant from the European Union which also caters for the construction of an abattoir on Mahé. The abattoir has the capacity to slaughter 20 animals.

On returning to Ile Eve, President Ramkalawan and delegation visited a site reserved for industrial purposes. Forty-nine new plots of land are now available for allocation which will also include a piece of land to be taken back from Vijay Construction Pty Ltd for redistribution to Praslinois.

With regard to the Baie St Anne police station, a new one is expected to be built adjacent to the current one but negotiations will also take place with a private businessman for the possibility to acquire a shopping business to transform it into a police station as its location has been seen as ideal for the purpose. The swap will include giving the businessman a piece of land on Ile Eve to set up his shopping business. The Seychelles Fishing Authority (SFA) ice plant which also stands on the land to be taken for the expansion of the police station, will move seaward across the road opposite to a small jetty to be renovated for the fishing community.

Apart from providing a new police station for a more conducive work environment, on his interaction with the police officers, President Ramkalawan was taken aback from learning that Praslin has problems relating to speeding, drunk driving and loud music, especially from cars.

He called for immediate actions and solutions to remedy the situation. The station also lack manpower.

President Ramkalawan was very satisfied with major improvement to air and noise pollution emitted by the Public Utilities Corporation (PUC) power station at Baie St Anne. Acoustic cladding has been installed inside the station to reduce noise while the ventilation system has been upgraded and the heights of the exhausts have been increased along with catalytic converters installed inside to reduce exhaust emissions. During their discussion on the visit at the power station, it was decided a negotiation will have to take place between PUC and a nearby family who is still being affected by heat coming from part of the station, for an exchange of property. It was also decided that the department of environment speeds up its procedures with regard to the compensation issue so that the affected families can be paid their compensations.

Inadequate staffing, lack of maintenance on the infrastructure and equipment, procurement of certain equipment, lack of space, especially for the laboratory and a sewage system that was not working properly, were some of the main concerns to be addressed at the Baie Ste Anne Hospital. The hospital had also wanted the authorities to provide it with spares for the only decompression chamber on the island and to have it placed in an appropriate location other than in the car park. The hospital is also in need of a proper laundry.

President Ramkalawan’s first stop in the district of Grand Anse Praslin was at the health centre. The clinic’s main concerns are staffing, lack of working space and transport. An additional dental chair and additional consultation rooms were also requested including that for an additional ambulance to serve both clinics on the island. With regard to spacing, an old dilapidated building behind the clinic will be renovated to accommodate the public health staff.

At the police station, which was recently rebuilt in 2018, the police officers there, apart from complaining a lack in staffing, also requested for either a canteen or a rest room as none exists. They also asked the station to be fenced off to prevent free access or vandalism by the public and for safety purposes.

At the landfill at Amitié, the challenge is to find proper soil such as coral fill, to conduct proper compacting. It was also decided for proper fencing of the landfill to prevent human and animal scavengers.

Talking about erosion issues at the Amitié coastline, following the completion of the first phase of a rock armouring project, President Ramkalawan said that when battling erosion, we need to consider taking back what Mother Nature has taken from us in the first place.

President Ramkalawan and his delegation learned of a lack of sitting capacities on Seychelles Public Transport Corporation (SPTC) buses on Praslin and more medium size buses were requested for an efficient bus service. The issue of flooding during heavy rains was also addressed along with a lack of working space and working environment. To mitigate congestion at SPTC during testing of vehicles, a new vehicle testing station has been planned on Ile Eve.

Also during the visit in the district of Baie St Anne, President Ramkalawan and delegation visited a hot spot at Côte D’Or where additional street lights will be installed and the undergrowth trimmed down for the safety of locals and visitors, especially at night.

He also paid a short visit to the Civil Construction Company Limited (CCCL) quarry where the company will be starting to make bricks early next year so as to bring down the cost of construction on the island. The delegation also discussed during the visit at Côte D’Or the construction of an artificial reef to break the force of the wave coming in.

While going down to visit the essential facilities and services at Grand Anse Praslin, President Ramkalawan, as the patron of the Seychelles Islands Foundation (SIF), paid a short visit to Vallée de Mai and met the staff of the World heritage site. He also visited a site for a new jetty and the Praslin Water Sports Centre, all behind the police station.

The visit ended with a meeting with the Praslin Business Association that wanted some ease in restrictions especially in relation to the prior 48-hour Covid-19 PRC tests for incoming visitors, they say is hurting our economy . Among other issues discussed the association had also wanted that business opportunities and tendering processes for the island are given to Praslin inhabitants first, a request accepted by President Ramkalawan.

With regard to the prior 48-hour Covid-19 PRC tests for incoming visitors, President Ramkalawan replied that the Ministry of Health is looking at every option available to mitigate the impact caused by the restrictions on our economy while bearing in mind the health of the nation. He noted that his cabinet is based on consultation with the public.

Both MNAs of the island said they were very satisfied with the visit conducted by President Ramkalawan and his delegation as it had given them the opportunity to raise concerns of the residents and to put in their inputs.

The accompanying photos show some more highlights of President Ramkalawan’s visit other than the ones published on Saturday. 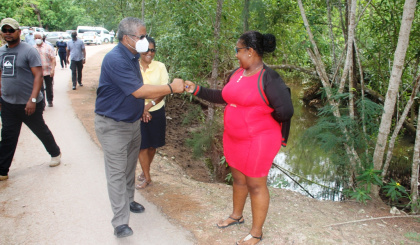 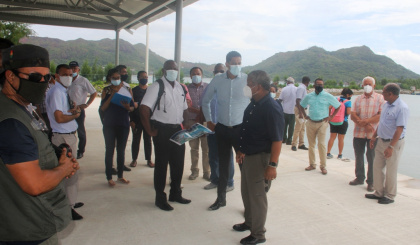 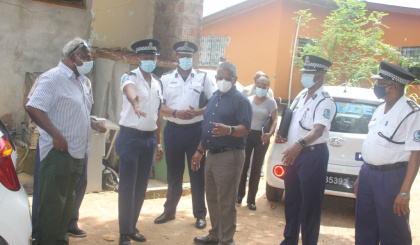 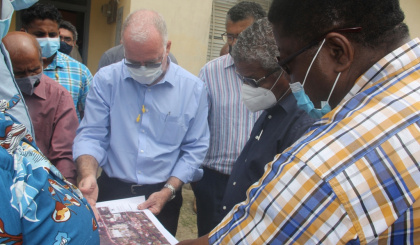