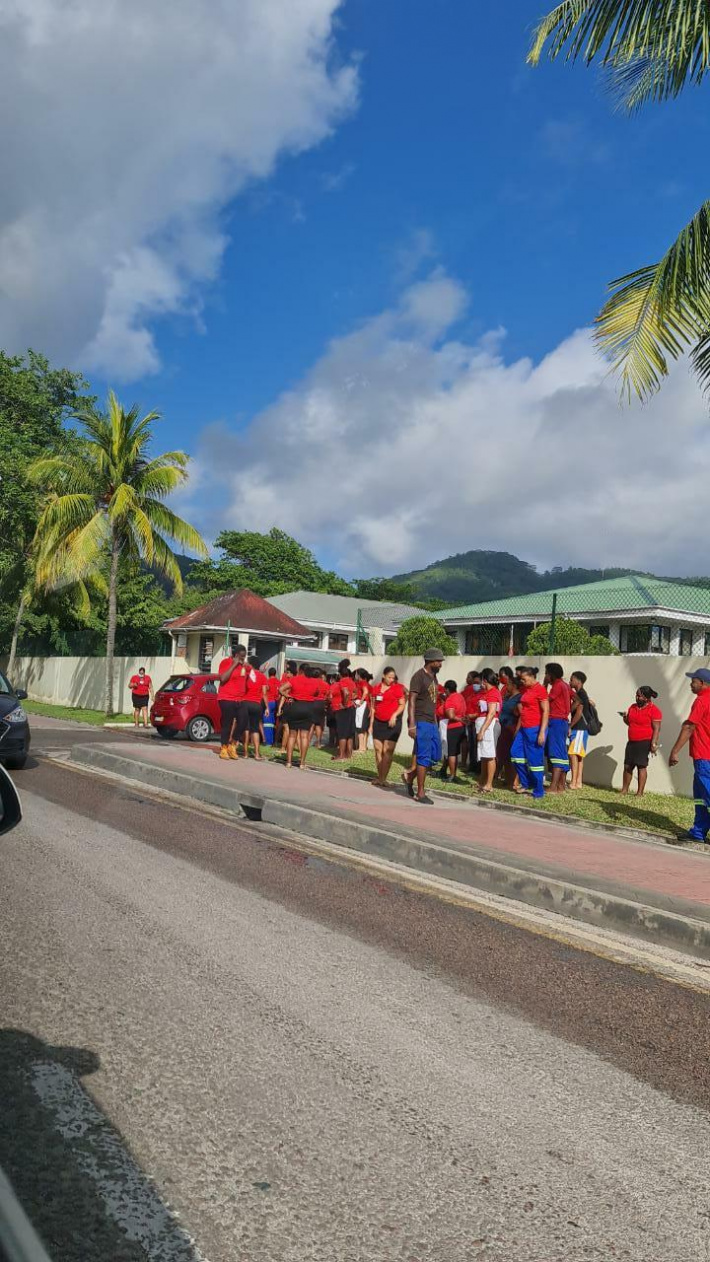 STC employees during their protests yesterday

Employees from the Seychelles Trading Company (STC) will now be paid an end of year bonus of R5000 across the board after some of them protested yesterday morning forcing the company to compromise.

In fact employees of the STC were among different groups of employees who staged sit-in protests yesterday morning after being informed that their end of year bonus would either not be paid or would be reduced.

After being informed by their management that they would not be paid a bonus this year, some STC employees at its warehouses on Latanier Road blocked access to all vehicles coming to the warehouses, even those coming to collect their merchandise.

STC services and operations were temporarily paralysed including the hypermarket which had to close down for lack of sufficient employees to run its operation.

“We have worked hard and I believe that at the end of the year we deserve a little something more. I earn only R6000 which is nothing following the exorbitant rise in the prices of everything and I am left with nothing. The CEO has talked to us but we want more fairness,” one of the frustrated employees exclaimed.

A compromise whereby R5000 will be paid to each of the 674 employees was agreed on after the Minister for Finance, Economic Planning and Trade Naadir Hassan held talks with representatives of the employees together with the management of the STC.

Minister Hassan said after the meeting that it was illegal for employees just to hold sit-in protests in the workplace before all labour dispute processes had been followed and these were not the case.

“The first step is for employers to hear their employees’ grievances and seek the best compromise. I have called on the workers union to better educate employees in work places and I am also calling on all workplaces to talk to their employees so they follow the right processes before resorting to protest,” Minister Hassan said.

Other companies whose employees staged protests were Skychef, Mason’s Travel and Absa. These protests followed one held by a large group of PUC employees early Thursday morning.

At Skychef the employees there threatened to protest after they were informed that there will be no bonus payment during their daily meeting.

The chairperson of the board of Skychef, Captain David Savy, said Skychef is not making any profit but a consequential loss and discussions were still ongoing as to how best to reward the employees.

He said after the employees expressed their discontent the board and shareholders agreed to share R1 million from shareholders among the 200 employees.

Meanwhile timely discussions at Absa and Mason’s Travel prevented a workers’ discontent from degenerating into protests.