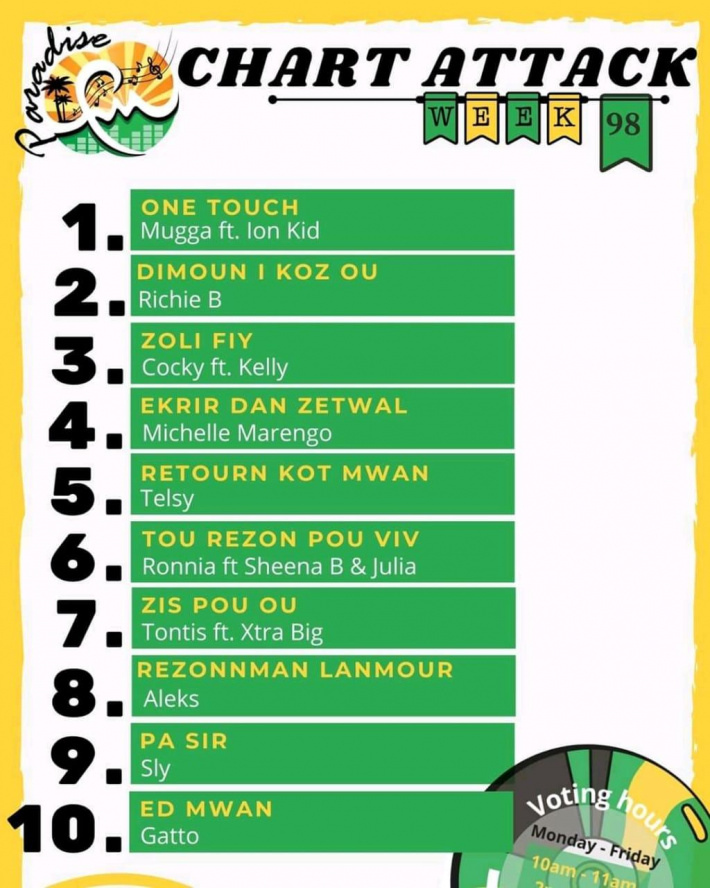 The song has spent in total five weeks on the chart after making its entry at number seven before soaring to number three the following week. It was on Sunday February 7, 2021 that One Touch took over the number one spot of the Paradise FM Chart Show from Telsy’s Retourn Kot Mwan song which had spent five weeks at the top.

At number two is Dimoun I Koze by Richie B which had shot up the chart to number four last week after it had lost five places, from fifth to 10th position, during the week of February 7.

One of three new entries last week at number six, Zoli Fiyby Cocky featuring Kelly is now in the number three position, while Michelle Marengo’s Ekrir Dan Zetwal song which had climbed up to number two last week after making its entry onto the chart at number three, is now in fourth place.

The show is hosted by Collin ‘Oriji’ Aglaé every Sunday from 10am to 1pm on Seychelles Broadcasting Corporation (SBC) Paradise FM radio.

Members of the public vote for their best song through an SMS voting system on text number 2520170. They have to add CHT in front of their text followed by the title and artist they are voting for. Ex: CHT Retourn Kot Mwan Telsy.

An individual is allowed to vote only once a week. The vote counting will be one telephone number per vote per week. Voting is open during the following times from Monday to Friday: 10am to 11am with Chicco Dan Paradi, 2pm to 3pm with Cusmun En Pti Pe Dan Tou, and 4.45pm to 6pm with Oriji in The Cruize.