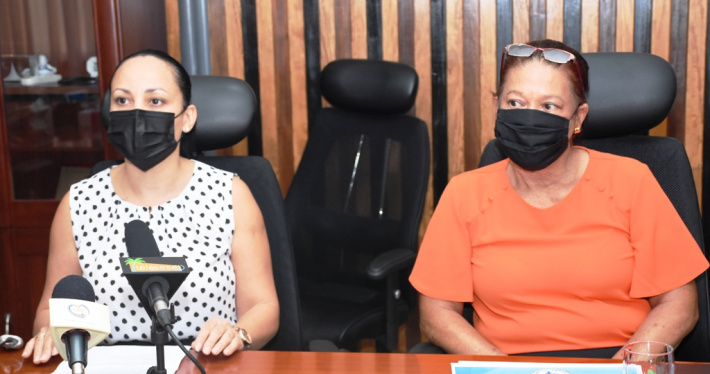 The Agency for Social Protection met with the press yesterday to explain the new structure by which operations will be run following the announcement of the 2021 budget.

The conference was headed by Brenda Morin, chief executive of ASP and Debbie Celtel, director of operations at ASP.

Ms Morin talked about Covid operations at the agency where they will be open from 9am to 11.30am. Lodging of applications will also be conducted through appointments only and payment days for alimony will be from Monday to Friday while the rest from Tuesday to Thursday only.

Rates at which these benefits are given out include R2,480 for sickness, survivor and maternity leave.

Mrs Celtel also explained that there are a total of 15 schemes that were administered by the agency prior to 2021. After restructuring, eight schemes out of the fifteen have been transferred to other ministries and departments.

Five schemes have been transferred to the Ministry of Education. These include, post secondary bursary school allowance, payment of inter island boat ferry for students, bus fare, dedicated funds, and payment of apprenticeships.

Vulnerable home repair schemes have been shifted to the Ministry for Housing, Infrastructure, Land and Transport, while the skills development programme has moved to the employment department.

All applications made will be reviewed by ASP to make sure that the applicant truly qualifies for the service, which means that they will need to provide their documents such as bills, bank statements, birth certificates, loan agreements if any and so on.

Ms Morin also addressed the issue of corruption which had run rampant in the agency for years. She noted that in October last year the internal audit department of the Ministry of Finance and the auditor general conducted an audit on the ASP. The audit covered the period 2018 to 2020 and the final report was presented to the Minister for Finance and the CEO herself.

Ms Morin noted that her duty now is to make sure that the discrepancies that were raised in the audit do not happen again so that ASP sheds that negative image it has and starts fulfilling its duties which is helping the vulnerable.

One issue that came up was that there was unauthorised access in the payroll system of ASP where modifications were taking place as well as documents being tampered with.

Ms Morin said to make sure that this does not happen again, they have restricted access to the payroll system to only authorised personnel. Staff access will be monitored and they will not have remote access on the system once they are not at work.

Another issue that was noted by the auditor was that people who did not need assistance were getting money through ASP.

It was found that people who were living abroad and those who had passed away were in the system receiving benefits.

“To stop this from happening a committee has been formed to review all applications. They will decide if that person will be approved for assistance. A file will also be created regarding the applicant that will give the reason why they were approved or rejected,” said Ms Morin.

A rejected applicant can also appeal their case if they got rejected for assistance. This will go through another committee which will assess their case.

The auditor also found that there wasn't a standard operating procedure that is consistent, which meant that files and the business being run was inconsistent. So to address this, ASP has now put in place a checklist which the officer administering a file has to tick every box to ensure all documents required are there.

“Our payment system was also manipulated so that corrupt practices would go unnoticed. What we have done is to revise all systems used to make payments and new applications so that people would not be able to interfere. We are also working with the department of treasury at the Ministry of Finance to make all payments for people whose money is credited to their bank account. This will give more segregation of duty and will be better monitored to make sure that everything is done according to the law,” said the CEO.

She also added that there were discrepancies regarding cash payment and in order to rectify that they are asking their clients who do not have a bank account to open one so that their money can be deposited directly in it. Strict control has been made to make sure that every cent is accounted for.