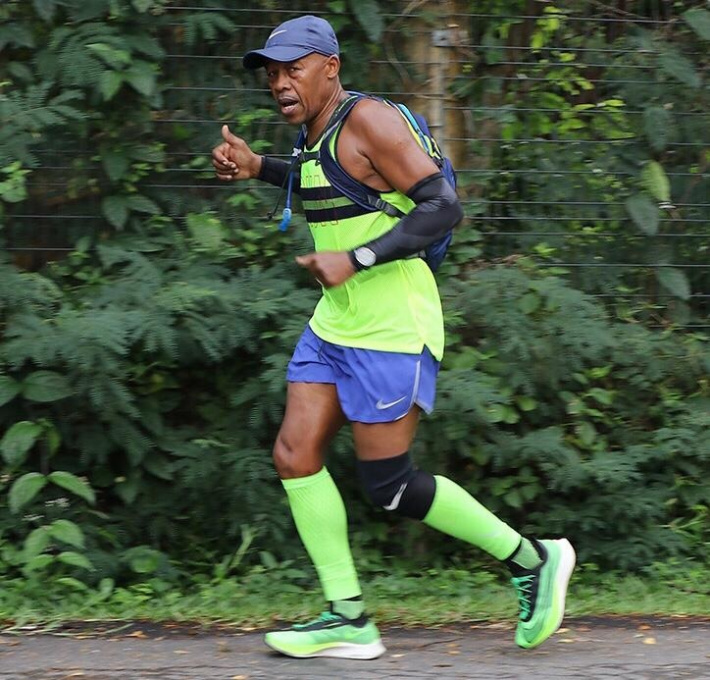 Despite the pandemic and generally gloomy atmosphere looming over the world, enthusiastic runner Joel Melanie has not let the current state of affairs dampen his spirits, nor has he given up on his second ‘Run for Charity’ project, in aid of local charities.

Mr Melanie, who started the personal project in 2018 with the aim of raising funds for financially-struggling associations towards infrastructure development or other facilities to provide long-term support for Seychellois families and children, successfully completed the promised 21km run on Saturday February 20, marking the end of the second phase of his project.

Initially, the running enthusiast’s goal was to run the 42.5km Eco-friendly marathon around Mahé in February 2020, to raise funds in aid of Autism Seychelles. However, he was unable to run the marathon after sustaining an injury while training, forcing him to push his run forward. Despite the setback, Mr Melanie remained determined in his pursuit, having raised R55,623 for the organisation, towards learning aids and visual leaning resources for the Autism Resource Centre at North East Point.

He officially remitted the funds to Autism Seychelles in a brief ceremony on August 1,2020.

“It was a big disappointment when I couldn’t make the Eco-Friendly marathon, but, injuries are part of it I suppose. In all, I am happy that I made the run, delivered on my promise to all who donated and sponsored the project,” Mr Melanie said.

“The first project for Cancer Concern Association, I managed to raise around R370, 000 so I think if the Covid-19 pandemic hadn’t hit us, and with all the restrictions and all, I could have raised more from businesses and organisations. But the pandemic and impact on the economy considered, I am still happy to have achieved it,” a beaming Melanie said.

Having turned the page on the second project, Mr Melanie is swiftly moving on to his third and final project, the details of which are soon to be finalised.

He hopes that through his project, others will be encouraged and engaged in fund-raising activities to the benefit of non-governmental organisations (NGOs) and charitable causes.

“This will be my third and final project. Of course I am aiming to top my last two projects but anything I collect, I am grateful for. I get a lot of encouragement from a lot of people, the donors themselves so ultimately, I hope that the project has a domino effect, that it raises others to action for such causes. We can all make a difference to our society through our actions,” he added.

For the first leg of the project, Mr Melanie raised a whopping R370,477.53 towards Cancer Concern Association (CCA) from individuals, businesses and companies through the Corporate Social Responsibility (CSR) programmes.

He hopes that the third and final leg of the project will be as successful as the first two and that his donations can go a long way for the beneficiaries.