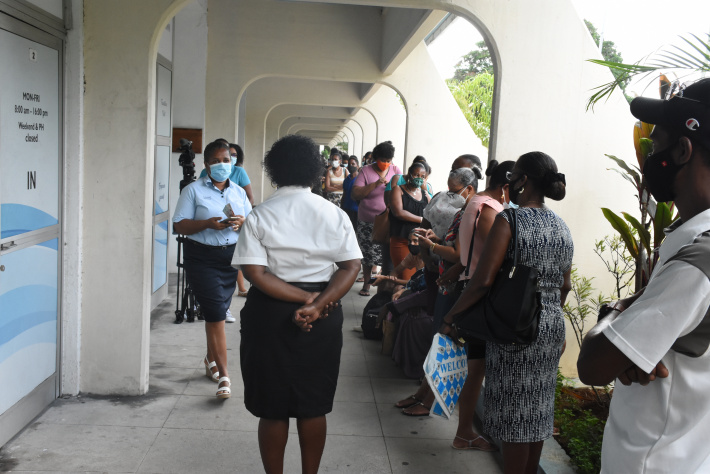 A long line of people along the verandah of Oceangate House waiting to go in the Employment Services office yesterday (Photo: Louis Toussaint)

People looking or seeking assistance for jobs are being urged to get registered with the Employment Services in the Ministry of Employment and Social Affairs.

The call was made by the Minister for Employment and Social Affairs, Patricia Francourt, during the opening of the new Employment Services office yesterday morning at Room 2, Ocean Gate House.

The service for registration of people looking for employment has since yesterday been shifted from its base at Independence House to Ocean Gate House. It came into operation in the presence of Minister Francourt who witnessed a large number of people who had come down to use the service offered by the fifteen staff members.

The minister also had the chance to interact with some of the first to come inside. The ministry has employment services offices on Praslin and La Digue which were also attending to jobseekers yesterday.

Most of the people in the long queue were those under the Unemployment Relief Scheme (URS) and Seychelles Employee Transition Scheme (Sets) programmes, both of which came to an end of February.

Also present were the principal secretary for employment, Jules Baker, and the director general for Employment Services, Letimie Dookley.

Apart from compiling and verifying returns pertaining to registration of jobseekers, the services provided by the office include placement of jobseekers and vacancy adverts as submitted by nine private employment agencies, with those gathered from the market and from some forty registered employers.

People coming to register are being advised to bring along their ID cards, CVs and relevant certificates or documents for their profiling. This will allow the service to have an accurate overview of who they (jobseekers) are and what jobs they are looking for and most importantly to be able to match them (through their skills and profiles) with a job.

Speaking to the press, Minister Francourt described the opening of the Employment Services office as a great day for the department of employment as now the ministry will be able to get an accurate number of people who are unemployed especially with the closure of URS and SETS, as well as the FA4JR scheme which will also come to an end by the end of this month.

“People who come to register will be able to help us, as employment department, to look at our skills matching and profiling system because this is a digital system where we can actually straightaway recognise and identify where jobs are and at a very fast pace start matching people with the jobs and vacancies that we have,” she said.

Minister Francourt however cautioned that being registered for a job with the Employment Services does not automatically mean that one is guaranteed assistance from the Agency for Social Protection (ASP).

She said that the ASP has its own procedures and social means testing based on merits.

She noted that in this time of the pandemic, those fit to work must do so and must not rely on ASP’s assistance.

She called on unemployed people to assume their responsibility to look for work and to take up jobs that are available while also staying on the job if the country is to attain its goal of cutting down on gainful occupation permits (GOPs).

The minister was referring to a situation where 50 Seychellois workers out of 230 workers employed by Club Med on St Anne recently have chosen to resign for no valid reasons.

Minister Francourt claimed that from January to February 2021 there were 1100 jobs available on the market be it in tourism, on the outer islands or elsewhere and people looking for jobs should seize the opportunities available.

She said that the ministry has officials attending to interviews at certain big recruitments for interventions in favour of both parties.

She reminded the public that the employment department is just a facilitator and the responsibility to seek for a job lies on the person.

She said that apart from people coming to register at the Employment Services, they can also go to other job recruitment agencies to be registered.

She added that a notice board has been placed outside of the office where people can come down at any time to look for vacancies.

She called on human resource officers in work places to make it their responsibility to revert back to job applicants.

For the time being the Employment Services on Mahé, Praslin and La Digue are open Monday to Friday from 8.30am to 12pm. 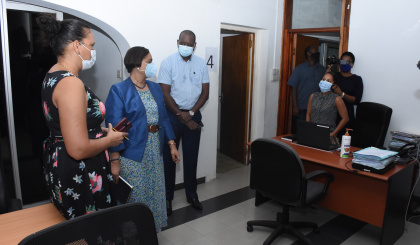