The runners in a souvenir photo

Organised on Saturday, the Simone Zapha Memorial half-marathon started and ended at Stad Popiler, the garden of local track and field athletics, where Simone spent a lot of her time training and competing.

The two winners were Maggy Harray (women) in 2 hours 01 minute 37 seconds (2h01:37) and Iven Moïse (men) in 1h19:11. They each received a trophy presented by Giovanna Rousseau and sponsored by the latter who is also the director of the Eco-Friendly races.

Speaking to Sports NATION, Ms Rousseau, who was the National Sports Council (NSC) chief executive from July 1, 2013 to June 30, 2018, said she wants the Simone Zapha Memorial half-marathon to become an annual event.

“There is an active group of runners who run almost daily and when they learned that Simone had died still so young, they proposed that we organise a race in her honour,” said Ms Rousseau.

She had been absent from the running tracks and roads since 2019 when she started feeling unwell and despite following treatment locally and overseas she did not regain her health.

Running her first marathon in ideal condition, she sliced 12 minutes 06 seconds (12:06) off Rachel Esparon’s previous best of 3h42:25 – both Seychelles senior and veteran records – set during the Fifth Indian Ocean Islands Games in 1998 in Reunion.

“I’m happy I did it. I did not expect to get the record. I was expecting a 3h45 finish,” a smiling Zapha told Sports NATION after the gruelling race.

“I felt good and when I reached Carana on the way back to the finish line, I was well inside the record pace. So I decided to go for it,” added the athlete who was 31 years old at that time.

In fact, Zapha is also the holder of the Seychelles women’s marathon record of 3h34:49 which she got during the Ekolomarathon in Tampon, Reunion in early July 2009.

Although she cruised to victory in the Eco-Friendly marathon in 3h30:19 that same year, her time was not ratified as a new Seychelles record by the Seychelles Athletics Federation.

The female finishers of 21km race:

The male finishers of 21km race: 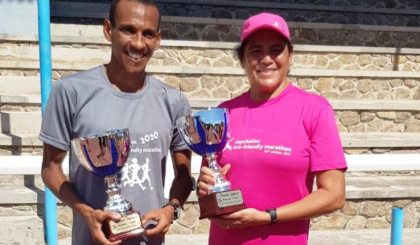