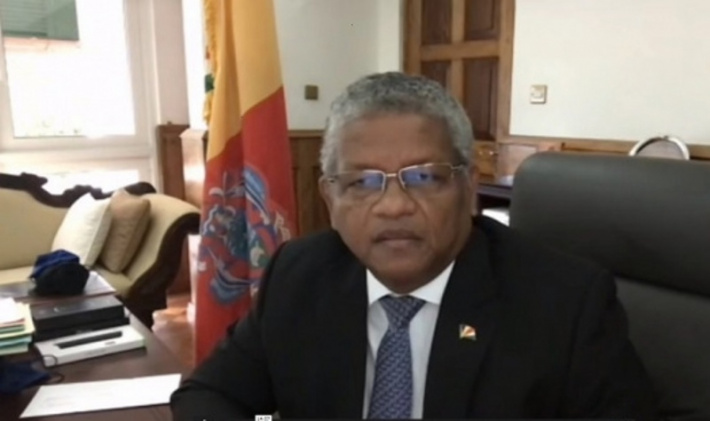 The President of the Republic, Wavel Ramkalawan, yesterday participated in the Renew Europe Group in the European Parliament and its Delegation for the Pacific, Africa, and the Caribbean (RENEWPAC) virtual conference, organised by The Renew Europe Group, dedicated to EU – Africa relations themed ‘Europe & Africa: Rebuilding the Future’.

In his remarks, President Ramkalawan noted the devastating impact of the Covid-19 pandemic in a range of spheres.

The President said that the pandemic has disrupted the entire global economy and society and how it has specifically affected the citizens on the continent of Africa.

“The consequential lockdowns, while necessary for health and safety, resulted in mass production shutdown, global supply chain interruptions, adverse impact on global capital markets, severe upsets of trade and drastic reduction in demand across all sectors of the global economy,” remarked President Ramkalawan.

“For most African economies, the lockdowns, curfews, closure of markets and mines, restrictions on cross-border movements and strict restriction measures left a trail of anguish. This included massive job losses and rising food prices, coupled by the plunge in commodity prices. All this has serious ramifications on current and future production capacities,” said the President.

The Head of State also spoke about good governance and highlighted the issue of human rights that he says is affecting many countries and how each and every participants should seek ways to protect the vulnerable and how to rebuild a future together.

“As Africa and Europe continue to aspire to the highest standards of democratic governance, we must remain aware of the many abuses of human rights that continue to ravage our countries. The struggles may be different in some ways, but at the end of the day, be it that we are fighting for the rights of Africans born with albinism, protecting the girl child or simply having fair electoral process, both Europe and Africa have to do it together,” said the President.

He continued, “One of the immediate lessons is the fact that we are all weak or strong together. While the pandemic started in one part of the world, it quickly spread across the world to become a global phenomenon, everyone’s concern.”

The President also urges for vaccines to be made available to everyone irrespective of their income through an ethical manner.

He also spoke on capacity building of the state in order to mitigate future pandemics and natural disasters, especially in the health system.

“European and African Parliamentarians should have serious conversations regarding ensuring adequate funding to the financing mechanisms supporting access to the Covid vaccines, in particular the need for international development agencies, including the European Union, to prioritise funding the COVAX Advance Market Commitment, for instance, in order to secure vaccine access for low- and middle-income countries,” he said.

He added, “In view of the above, I wish to reiterate the call by the World Health Organisation to ensure equitable distribution of the Covid-19 vaccine by ensuring that the distribution criteria are clear, ethical, rights-based, and include metrics for ensuring vaccine access for prioritised populations. As we ponder on the post-Covid future, we need to prioritise building local capacities not just for industry and trade but also capacity of the state. The Covid-19 experience has revealed significant capacity gaps in African states, and it was not a coincidence that where state institutions were weak, the country’s response to the Covid-19 pandemic was also poor,” the President noted.

President Ramkalawan also urges countries to consider debt cancellation and debt restructuring for some African countries by European and other international creditors, while noting on how Africa is trying to consolidate and advance its continental market integration objectives and to unlock its full productive capacity through the African Continental Free Trade Area (AfCFTA).

He invited the European countries to tap in this venture and partner with the African countries, all in the hope to help Africa improve the competitiveness of its own market and globally.

“The AfCFTA will also assist Africa to address the traditional teething trade and economic development challenges such as market fragmentation, smallness of national economies, over reliance on the export of primary commodities, narrow export base due to shallow manufacturing capacity, lack of export specialisation, under-developed industrial regional value chains, and high regulatory and tariff barriers to intra-Africa trade amongst others.”

“Europe should therefore, partner Africa in the implementation of the AfCFTA and assist the continent to boost intra-Africa trade, improve economies of scale and establish an integrated market. Through technological transfer and related financial and technical support from the Europe, Africa should be able to unlock and catalyse its industrial development capacity and be able to export value-added products rather than raw materials as in the past,” said the President.

The virtual conference saw the participation of over 20 high-level speakers from 20 different countries, highlighted by prominent speakers such as the former European Commissioner and Belgium Foreign Affairs Minister Mr Louis Michel and the special keynote speech by UN Senior Advisor, Professor Jeffrey Sachs.

Through the successful conclusion of the European Parliament report ‘The New EU - Africa Strategy’, led by Renew Europe, this conference reflects such commitment targeted by the political group and all its members.

The President's remarks can be read and viewed on the following links: