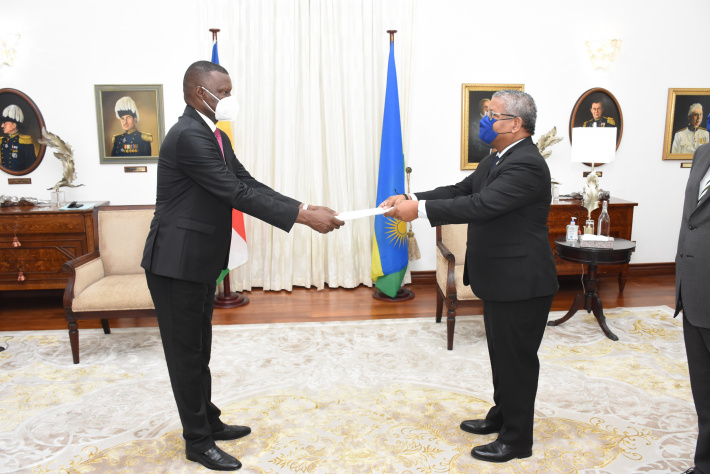 Speaking to the press afterwards, Mr Karamba noted that the relationship between Rwanda and Seychelles has been very good and long-standing.

“This morning I was very proud to present my credentials to the head of state and I was also able to bring him greetings from the President of Rwanda, Paul Kagame,” said HC Karamba.

He added that President Kagame was one of the first presidents to congratulate President Ramkalawan after his historic win in the presidential election six months ago, adding that this highlights the cordial relationship the two countries have with each other.

Seychelles and Rwanda are expected to collaborate in many sectors especially in the tourism industry, noted the high commissioner.

“Seychelles is highly developed in tourism and there is a lot that can be shared between the two countries in order to make sure that this sector is developed to the highest level,” he said.

Regarding education, the high commissioner said: “Our two countries are part of both the Commonwealth and Francophonie and when it comes to education we have discussed how to cooperate and how universities in Rwanda can interact with the University of Seychelles.”

Regarding their interaction, the high commissioner said Vice-President Afif was kind enough to acknowledge the Rwandan genocide in 1994, adding that they also talked about development possibilities.

“We also discussed the effect of the Covid-19 pandemic and the impact it has on our economy and how we can share our expertise and experience to move forward from the pandemic,” said HC Karamba.

Mr Karamba is the fourth Rwanda high commissioner to be accredited to Seychelles and replaces Eugene Kayihura. He will be based in Dar Es Salaam, Tanzania. 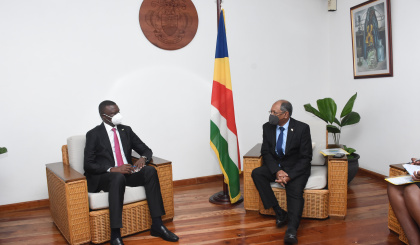