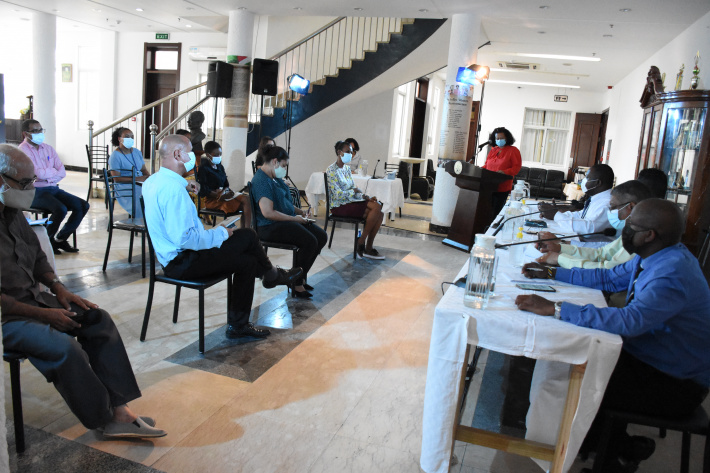 The debate, moderated by experienced journalist and media practitioner Marie-Anette Ernesta, saw media practitioners, members of the committee, Judge and chairperson of the Seychelles Human Rights Commission (SHRC) Bernardin Renaud, media secretary of the Media Commission Tessa Henderson, Ombudsman Nichole Tirant Gherardi, Commissioner of the Anti-Corruption Commission of Seychelles (ACCS) May De Silva, and other invitees sharing their experiences and perspectives on numerous topical issues relating to this year’s theme ‘Information as a Public Good’, over the course of two hours.

In his opening remarks, chairperson the MYCC, Hon. Wavel Woodcock, highlighted the rationale of the debates, as a means to hear from industry voices, as the institution with oversight over state media, through the national budget exercise.

While he highlighted that the local media landscape has evolved significantly over the years, as well as freedoms including freedom of speech and freedom of expression, Hon. Woodcock also made reference to the ubiquity of the internet and social media platforms, which is to some extent undermining the role of the media as the fourth pillar of society.

Various questions were put to the floor including whether the media is in its current state achieving its function in disseminating information for the public interest, and whether social media and fake news have any negative implications on the media. Considering the far-reaching consequences of the Covid-19 pandemic, the impacts of the pandemic on media houses in Seychelles was also on the table.

Among the points raised were for better training and development for media practitioners to better deliver on the mandate, expectations of the public, and to do so in an ethical and professional manner.

There was general consensus that social media and the upsurge in citizen journalism and fake news are indeed undermining media houses as there is a tendency to trust unverified sources on the basis that they often ‘break news’ earlier than media houses, whereby standards and ethics dictate that information be verified, sources sought and that the information be presented in required formats, all of which takes time.

It was also proposed that some legislations and regulations relating to media are limiting, restrictive and outdated, including the Newspaper Act, which fails to make provisions for online publications, a norm in the digital age and in a fast-evolving world whereby traditional media houses are becoming obsolete on account of significant decline in advertising revenue and financial woes.

Hon. Gervais Henrie highlighted the small domestic market, and the need for the media to evolve so as to meet what is expected of both public and private media, recommending that the media focus more on matters that are really of public interest, namely reports published and which are easily accessible through platforms and institutions including the Public Enterprise Monitoring Commission (PEMC).

It was also agreed that there should in general be more focus and emphasis on training of media practitioners for a bigger pool of talent and an industry that operates to high standards, and in the public interest, for the public good, and towards advancing democracy and citizen engagement.

It must be noted that the Media Commission Act is being reviewed for presentation to Cabinet.