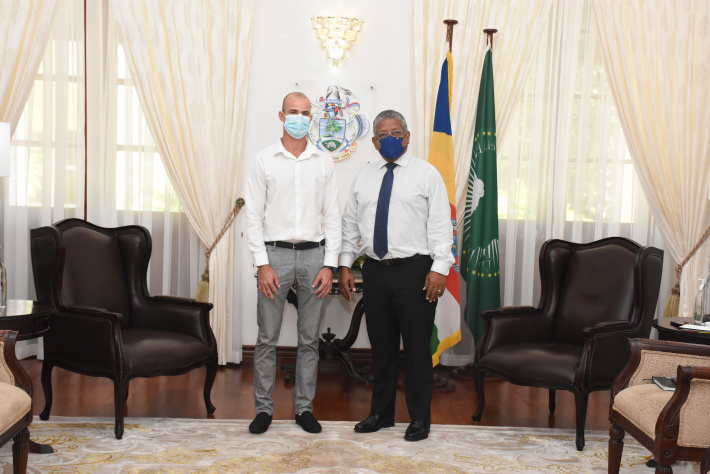 Following his heroic act where he saved a Russian tourist from drowning a few days ago at the Anse Gaulette beach at Baie Lazare, surfing instructor Jean-Marc Hoareau was yesterday welcomed at State House by President Wavel Ramkalawan who personally thanked and commended him for his action.

During the incident, which happened on Sunday May 23, at around 4pm, Mr Hoareau was made aware of a male tourist who was fighting for his life in strong currents at Anse Gaulette and he instantly rushed to the beach which is just across the road from where he lives.

He placed the man on the surfboard and brought him to shore where his wife and baby where waiting. Once on the beach, Mr Hoareau asked him some questions such as whether he had taken in any water and he responded that he had not.

However he started vomiting up water and food after being placed on his side which showed that he had taken in some water.

During yesterday’s courtesy call, Mr Hoareau and the head of State discussed on a personal dream project of the former to build a rescue post with life saving facilities on the Anse Gaulette beach to help assist swimmers in distress.

It is to note that is not the first time that Mr Hoareau has assisted swimmers ‒ foreigners and locals alike ‒ who were involved in near-drowning and drowning incidents in Baie Lazare.

The Red Cross Society of Seychelles (RCSS) has offered to give Mr Hoareau some First Aid training that will help him more especially given that he has saved more than one person.

Mr Hoareau has been invited to become a fully-fledged Red Cross volunteer and also assist the Red Cross as an instructor for its water rescue training programme, which has been dormant for quite a while.