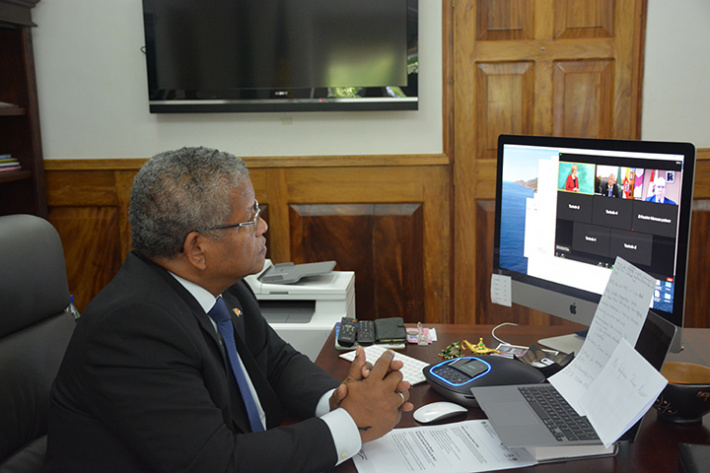 President Wavel Ramkalawan took part in the virtual high-level launch of the Ocean Decade conference held in Berlin and hosted by the German Federal Ministry of Education and Research in partnership with the Unesco’s Intergovernmental Oceanographic Commission (IOC).

The theme for this conference was ‘The Science we need for the ocean we want’.

In this stance, the President highlighted how small islands, though not directly responsible for various environmental impacts in their respective countries, have to seek alternative ways to make their voices heard on the global front.

“Seychelles as a small island developing state has already committed 30% of its EEZ to conservation, this is significant and as far as land mass is concerned, very small, but our EEZ is nearly four times the size of Germany. So, basically we are taking care of a huge part of the Indian Ocean,” said the President in his intervention.

Furthermore, Mr Ramkalawan noted the fact that any effects of climate change, such as rise in sea level, coastal erosion, does have direct effect on the Sids.

He underlined how Sids have to keep mitigating and making appeals to everyone concerned regarding the pollution of the ocean. There, the President referred to the Aldabra clean-up in 2019 where tonnes of rubbish where collected coming from all over the world.

Addressing the conference, the President also touched upon sustainable fishing and how Seychelles is playing its role in safeguarding the ocean and that the time for action is now if we are to collectively save the world ocean.

“We do not have time and we have to act now. When I look at what is happening to some of our islands, the coastal erosion, it is obvious that some will disappear in a few years’ time. World leaders need to come together now to engage in serious conversation because if we continue to postpone it, it may just be too late,” said the President.