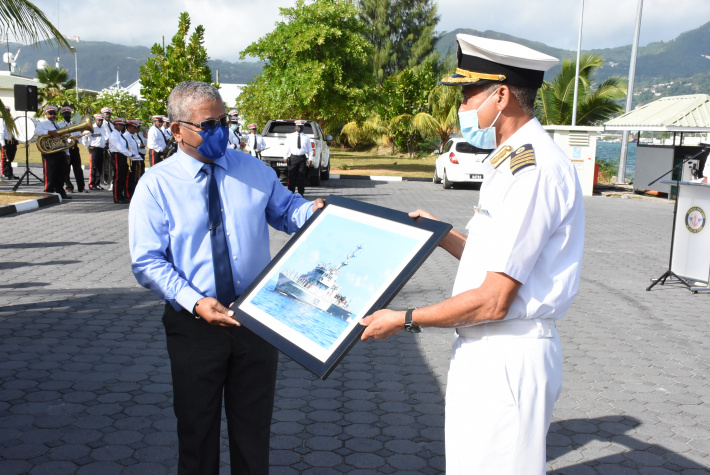 Col. Rosette present President Ramkalawan with a picture of the patrol vessel as a memento

‘PS Zoroaster’ is the newest addition to the Seychelles Coast Guard’s fleet of patrol vessels after it was commissioned yesterday morning in a short ceremony to coincide with the 45th anniversary of our Independence Day.

’PS Zoroaster’ was commissioned at the Seychelles Coast Guard (SCG), the maritime arm of the Seychelles People’s Defence Forces (SPDF), based at Ile Perverance.

To commission the new vessel, the National Flag was hoisted on board after it had been delivered to the ship’s commander, Captain Lyndon Lablache by Colonel Rosette while our National anthem was being played.

The flag hoisting was followed by the blessing of the vessel by Lieutenant Colonel Louis Agathine, the SPDF’s chaplain, after which guests were invited for a souvenir photo.

The 50-metre jet-propelled fast attack vessel equipped with state-of-the-art equipment, was officially handed over to the Commander-in-Chief of the Armed Forces President Ramkalawan by the Prime Minister of India, Narendra Modi, in a virtual ceremony held at State House on April 8, 2021.

As a symbolic gesture for that day, her crest was physically handed over to Minister Radegonde by HC Suhag.

Addressing everyone present, Colonel Rosette said the commissioning and formal operationalisation of PS Zoroaster has come at the opportune moment when the current administration under the leadership of President Ramkalawan is putting much emphasis on combating maritime crime related to drug trafficking and illegal unreported and unregulated fishing among others.

“For the Seychelles People’s Defence Forces and the Coast Guard, the defence of our country, the protection and preservation of our maritime environment and safety of our mariners are of utmost importance,” Colonel Rosette said, noting that our livelihood and existence are tied to the maritime domain and freedom of navigation.

He said that PS Zoroaster with its added capabilities will be put to good use and she will no doubt contribute immensely in carrying out continuous patrols and policing in our vast exclusive economic zone.

“The mutual understanding and deep cooperation between India and Seychelles is a matter of pride, and today’s historic ceremony is testimony of that deep bond that exists and a manifestation of the enhanced defence cooperation between our two countries which has withstood the test of time and continues to grow from strength to strength,” Colonel Rosette added.

For his part, the acting commander of the SCG, Lieutenant Jean Attala, said that PS Zoroaster and crew are ready to carry out missions that have recently become more intense and targeted.

He added that the vessel will have much to contribute in supporting the SCG in its various operations and more importantly to relieve other sister ships in the important task of safeguarding our sovereignty.

PS Zoroaster was constructed by the Garden Reach Shipbuilders & Engineering in Kolkata, India, through a grant of US $16 million from the Indian government. She was launched in February 2021 but due to Covid-19 restrictions, our local crew was not able to collect her and it was the Indian Navy officers who sailed her in Port Victoria in March 2021.

While in the country, the Indian Navy also worked with the local crew and trained them on how to operate and man the vessel.

The SCG’s PS Zoroaster is an advanced, powerful and fuel efficient vessel capable of carrying out anti-smuggling and anti-poaching operations including search and rescue among its other routine patrols and operations.

The vessel is equipped with a 44/60 gun and has modular air-condition accommodation for 35 personnel and can reach a maximum speed of 35 knots with an endurance of more than 1500 nautical miles. She is the fourth navy vessel in the SCG fleet of vessels received from India. She joins the other two larger vessels – Topaz and Etoile – as the three main and major offshore patrol ships of the SCG.

As customary, local patrol ships are named after fishing banks and shoals, and PS Zoroaster is named after a local fishing bank – the ‘Zoroaster Shoal’ – located on the Mahé Plateau, some 70 nautical miles East of Mahé. 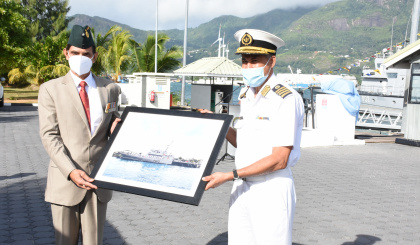 Col. Rosette present Indian HC Suhag with a picture of the patrol vessel as a memento 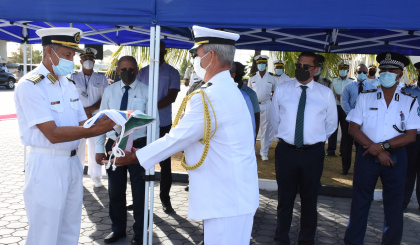 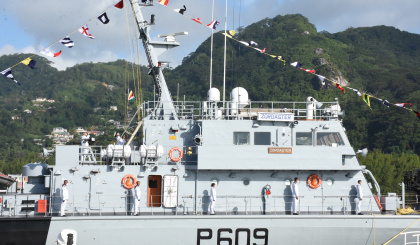 The flag hositing onboard PS Zoroaster 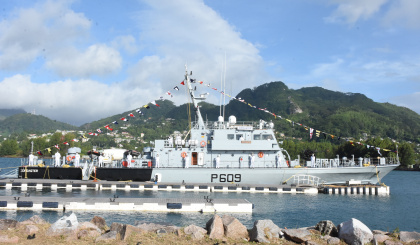