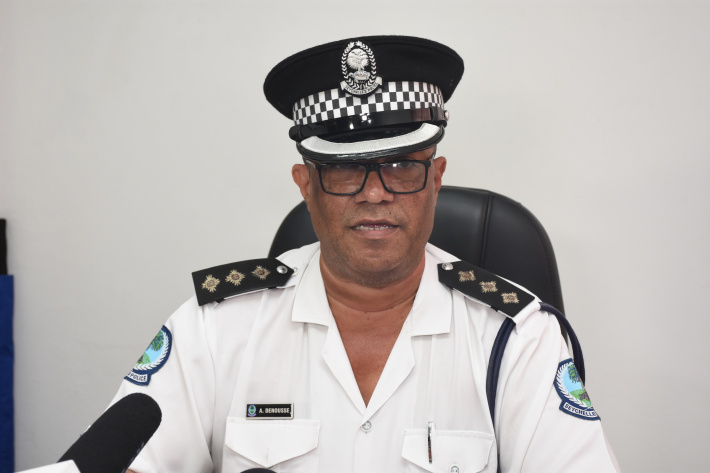 What would have been a quiet and routine stop and search operation at Roche Caïman’s Eden Village escalated into chaos on Friday night.

It was an operation led by assistant superintendent (ASP) Antoine Desnousse with 40-odd police officers from various units such as the dog unit, traffic unit, Mont Fleuri station, elite, and the marine police.

ASP Desnousse explained that the operation at Roche Caïman forms part of an exercise specifically targeting areas where law and order are being flouted.

Mr Desnousse noted that the Eden Village, commonly known as ‘Kosovo’, is a hotspot area for drug dealings, black market sales of alcohol, cigarettes and other items, disturbances amongst others.

It is to be recalled that, in his address to the National Assembly, new police commissioner, Ted Barbé, had detailed his plans for the police force to proactively target hotspots to curb crimes in the country.

“We cannot allow criminal activities to continue in places where most of the residents are law abiding and where even district representatives have expressed concerns from their constituents in the National Assembly. The police felt it had to deal with this issue and we started with the Eden Village’,” explained ASP Desnousse on Saturday afternoon in a press interview at the police headquarters.

According to ASP Desnousse, the operation was primarily at the Eden Village entry way where stop and search of cars as well as of individuals was conducted.

This was however met with opposition and retaliations from certain individuals.

At around 9pm, the situation escalated into chaos with civilians throwing glass bottles, rocks and explosives used to break ice on fishing vessels (petar ton in Creole) at the police officers.

In order to disperse the mob, the police officers fired several warning shots into the air and teargas was also used.

There were also attempts to bring down the police drone which was taking video evidence of the incident, according to ASP Desnousse.

“The civilians also blacked out the streetlights at one point and so we remained confined at one spot, to protect our officers, until PUC (Public Utilities Corporation) could restore the streetlights back on. We mobilised the assistance of the military and continued with our work.”

The police have and are continuing to arrest those who were involved in obstructing the police and assaulting its officers, including two teenagers who are said to have thrown explosives used to break ice on fishing vessels (petar ton in Creole).

No casualties were recorded by the police.

The police left the Eden Village around midnight after defusing the situation.

Although ASP Desnousse noted that the initial aim of the operation was stop and search at the entry of the Eden Village, videos circulating from Friday night’s incident show the police entering residential houses and premises, and having heated altercations with civilians.

It has also been alleged that a four-month old baby was affected by teargas that was deployed during the incident.

During the interview with the press on Saturday afternoon, ASP Denousse stated that the police had not received a formal complaint or statement in that regards.

It is to be highlighted that the parent of the four-month old came forward to state that the teargas was actually deployed in her home by the police.

“I was made aware of this situation yesterday (Friday). We were trying to make several arrests and we were obstructed by some people, this is when teargas was used. I do not know how much it affected the child but we had to react because some people at that house were putting the lives of the officers in a command station nearby at risk,” stated ASP Desnousse.

“Unfortunately because an officer needed to defuse the situation, the child might have gotten affected but it is not our intention to hurt any child during an operation. However, parents should be responsible and not venture outside with their child to cause trouble and insult the police, and should not allow their children to roam free on the street during these incidents.”

ASP Desnousse further stated that firing shots into the air did not pose any risks to civilians in this residential area but was simply a means to bring about some order during the riot.

He also noted that Friday’s incident should not be linked to previous allegations of police brutality as appropriate force was used as a reaction to the hostility.

“When things go out of hand, the police have to use certain amount of force but we did not use excessive force. We arrested people when necessary. It is important to clarify that this area has black market dealings, drug cartels ‒ we know them and we will target them,” stated ASP Desnousse.

He explained that similar operations will be held in other areas across the country including continuous surveillance and operations at the Eden Village.