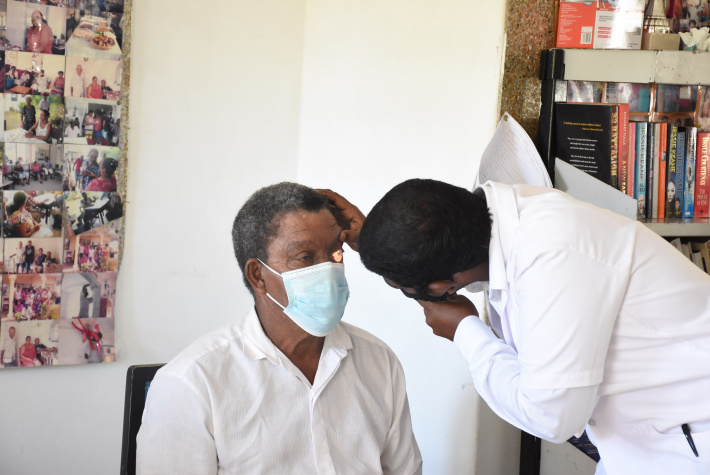 Residents of the Point Larue elderly home were on Saturday treated to free eye screenings and gift hampers, courtesy of the Lions Clubs of Seychelles, as part of their continuing nationwide screening campaign.

The home, which houses thirteen residents, is thus far the fourth elderly home to benefit from the eye screening and glasses donation project, which officially kicked off last year.

Of the thirteen residents, seven are in need of glasses, which are to be handed over to them at a future date.

As with the other homes, Optic Seychelles, an imperative partner for the project, was set up and ready to go by 7.30am, and had by 9.30am already screened half of the residents.

According to District 411A Officer and Lion for Vision and Sight for Kids in Region E, D.V Sharma, with the screening, they have covered around half the target group in elderly homes across Seychelles.

“By today we will be covering around 50 percent of the people, as there are around 130 residents, and with this activity we would have screened 61 of them. That leaves us three elderly homes, and then Praslin and La Digue. We will have to see to what extent we can achieve this,” Mr Sharma noted.

The nationwide project to bring eye screenings closer to the community and handover of glasses to those in need officially kicked off on October 18, 2020 at the Plaisance elderly home, whereby a total of 20 residents were screened, and ten glasses donated.

It was concluded that of the eighteen residents at the La Retraite home who were screened on November 22, 2020, eight were in need of glasses, and received theirs on May 8, 2021, along with those from the Plaisance facility.

The most recent screening was held with residents of the English River elderly home on August 21, 2021, and they are expected to receive their glasses on October 1, the National Day for the Elderly.

The project is being realised by the Lion’s Clubs of Seychelles, namely, Lions Club Seychelles, the Seychelles Centennial Women’s Lions Club, the Melvyn Jones Foundation Club, the Rising Lions Club and Zodiac Club, with the support of the Health Care Agency (HCA) and department of ophthalmology at the Ministry of Health, and the National Council for the Elderly.

Screenings are conducted by Optic Seychelles, while glasses are donated by the Mauritius Commercial Bank (MCB).  Hampers for the residents are sponsored by Lion Uma Ramani.

“If you consider the costs associated to this project, the cost of glasses, the cost of screening, the cost of frames, logistics, and all of these hampers. Imagine if we did not have sponsors and people behind the scenes, it would have been impossible for us, so it is a nationwide project,” said Mr Sharma, conveying gratitude to all sponsors and partners who help to make the project a reality.

The Lions Clubs hopes to bring the project to 24,000 school students across the country, once it secures funding to do so. 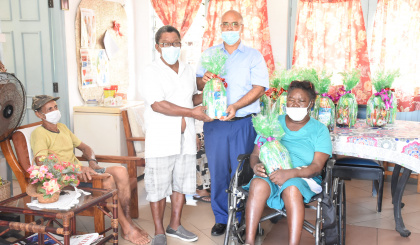