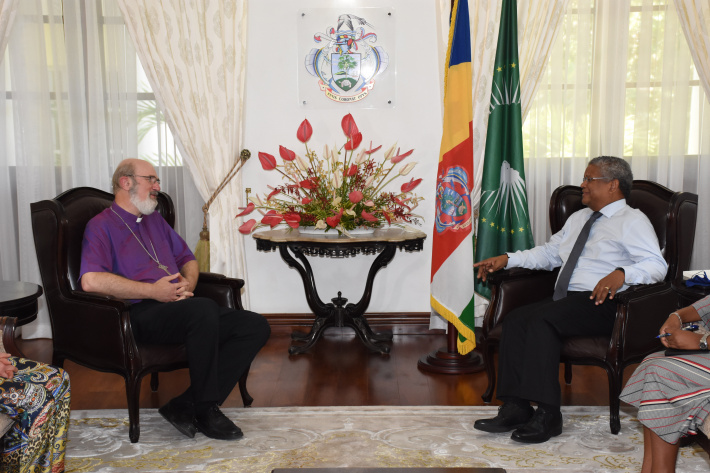 The secretary general, who is in Seychelles for a week and who over the course of the week will be meeting and interacting with church leaders across the country, discussed with the President the importance of uniting evangelicals among other topics.

I spoke with the President to firstly, congratulate him for pushing for changes towards democracy that are taking place, the signing of important laws, but on the other side, I wanted to ensure that we are working for the unification of Christians and not getting them to divide, and so it was a very good conversation,” Dr Schirrmacher noted.

SG and chief executive of the WEA, Dr Schirrmacher is President of the International Council of the International Society for Human Rights, and Associate secretary general for Theological Concerns (Theology, Theological Education, Intrafaith and Interfaith Relations, Religious Freedom, Research), which networks churches with approximately 600 million conservative Protestant Christians, chair of its theological commission, and director of the International Institute for Religious Freedom (Bonn, Cape Town, Colombo, Brasilia), the largest research network for religious freedom and against persecution of Christians and other religions and world views.

Schirrmacher is also a professor of the sociology of religion at the state University of the West in Timisoara, Romania and teaches also at Regent’s Park College of Oxford University. He is also founder of ‘Martin Bucer European Theological Seminary and Research Institutes’ with campuses in Berlin, Bielefeld, Bonn, Chemnitz, Hamburg, Innsbruck, Istanbul, Izmir, Linz, Munich, Pforzheim, Prague, Sao Paulo, Tirana, Zurich, where he teaches social ethics and comparative religions. The professor has given guest lectures at more than 200 universities and institutions around the globe in most major countries in the world.