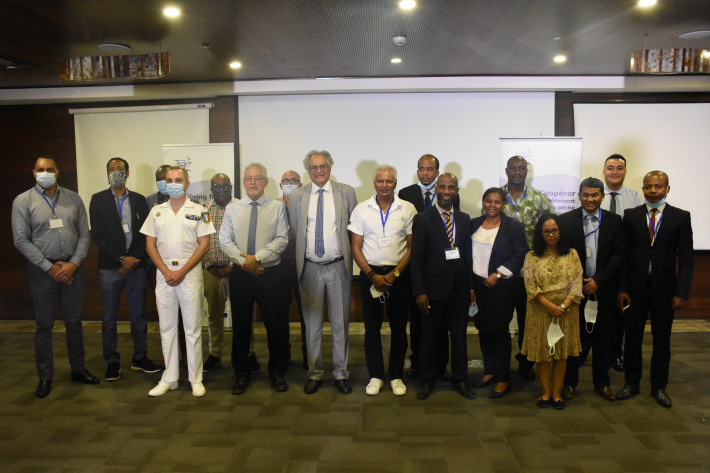 Delegates and guests in a souvenir photograph (Photo: Jude Morel)

Since its inception in 2007, the PRSP has made remarkable progress at supporting this region at combatting Illegal, Unreported and Unregulated Fishing through the grouping of the Indian Ocean island states, and other countries in the region, through a concerted approach of sharing resources, expertise and capacity of the participating states.

The above was highlighted by Designated Minister Jean-François Ferrari who also holds the portfolio for fisheries during the official launch of the 10th Enlarged Regional Coordination Unit of the Regional Fisheries Surveillance Plan – Le Plan Regional de Surveillance de Pêches – (PRSP) yesterday at the Savoy Resort and Spa Hotel, at Beau Vallon, in the presence of secretary general of the Indian Ocean Commission (IOC) – Commission de l'Océan Indien (COI) Vêlayoudom Marimoutou and representatives of member countries.

The PRSP is being implemented by the IOC in the fight against illegal, unregulated and unreported (IUU) fishing.

Its main objectives among others are to reduce IUU fishing in the region, to contribute to fisheries resources conservation and sustainable management, and to improve surveillance in the Indian Ocean. It also contributes to the sustainable management of fisheries resources in the Indian Ocean and the promotion of responsible fishing.

It was created in 2007 by IOC, an intergovernmental body formed in the 1980s, as a tool to address the problem.

Minister Ferrari said the success of the initiative has served as an effective model at combating IUU fishing, both in the region and beyond.

He explained that it is a well-known fact that preventing, deterring and eliminating IUU cannot be achieved by one country alone and that it is on that basis that the foundation for regional cooperation has been built under the programme.

“The good work being undertaken within this initiative supports our regional aspirations of sustainable economic growth of each individual country, and ultimately the region as a whole,” noted Minister Ferrari who further added that this highlights the importance of the work being undertaken through this initiative, and others that complements it.

The Designated Minister further explained that the PRSP is arguably one of the important factors that have contributed to the reduction of regional incidents of IUU, increasing the number of licenses issued to distant water fishing nation by the participating states, and significantly improving the monitoring control and surveillance capacity in the region.

Among other achievements of the programme mentioned by Minister Ferrari was the setting up of a regional vessel monitoring system (VMS) network, as well as the implementation of a Regional Fisheries Information Exchange Hub.

“While we have made impressive strides at achieving our objectives in the region, we are still faced with many challenges,” noted Minister Ferrari who explained that the two most pertinent issues yet to be resolved are the institutionalisation of the programme and its financial sustainability.

“Many of the commitments made by this region through the Declaration of the Ministerial Conference for Combating IUU Fishing in the Southwest Indian Ocean 2017 are yet to be realized,” he noted, while reminding those present of the work that still lies ahead.

To conclude, Minister Ferrari noted that the Covid-19 pandemic has brought about many challenges for us a as region, while it has also served as eye-opener to the importance of fisheries in region, and that we therefore must ensure success in whatever we are undertaking to promote sustainable fishing, and to combat IUU fishing, including the support of the PRSP.

Since 2007, the IOC, backed by the European Union (EU), has implemented the PRSP as part of a regional initiative to fight against IUU fishing.

The PRSP pools the surveillance officers, patrol vessels and airplanes of the IOC member countries for regional joint deployment plans.

Other countries, such as Tanzania and Kenya, have shown interest in joining the PRSP scheme. The emergence of new maritime surveillance initiatives in the Southwest Indian Ocean can be also noticed. 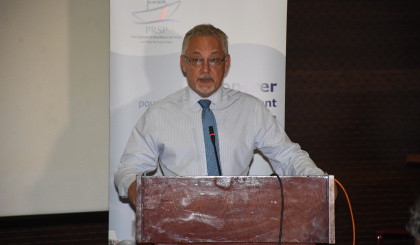 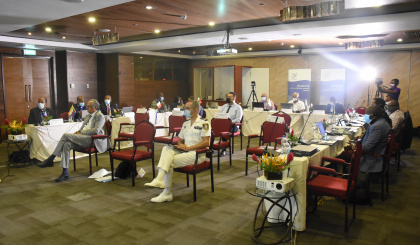