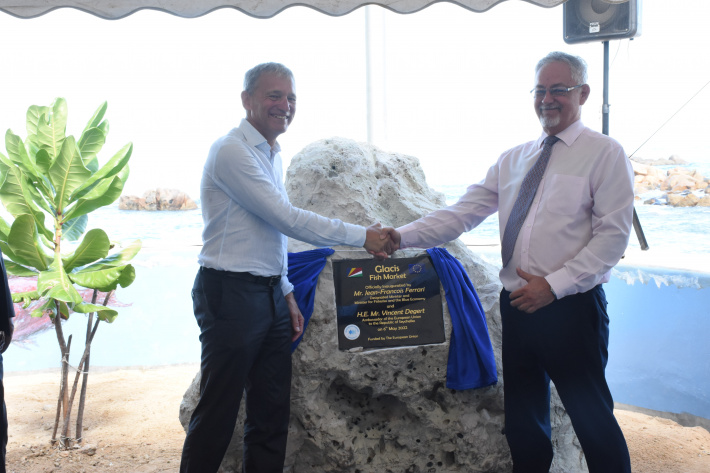 Residents of Glacis now have an ideal and more appealing place where to go and buy fish while the fishermen of the district have a convenient place to display their catch and better attract customers.

This follows the opening yesterday morning of the district’s new fish market by Designated Minister and Minister of Fisheries and the Blue Economy, Jean François Ferrari and the Ambassador of the European Union (EU) to Seychelles Vincent Degert, during a short ceremony to unveil the commemorative plaque to mark the event.

The plague is mounted on a large piece of coral retrieved during dredging last year to enlarge the channel for better boat access during low tide.

The new market, funded under the EU-Seychelles sustainable Fisheries Partnership Agreement, was constructed by KG Maintenance at a cost of R354,651. Work on the market started in December 2021 and was completed at the start of this month.

The small fish market, to improve the working conditions of the fishermen, was a request from the fishermen through the district’s member of the National Assembly, Hon. Regina Esparon. The fishermen, who for so many years have been selling their daily catch by the roadside, had wanted a proper, hygienic and environment friendly place to sell their fish in a more organised manner.

Parking space has been provided at the new market to facilitate customers as well as the fishermen when unloading their catch. The average number of active fishermen landing their catches at the Glacis site is 30.

Addressing all present for the ceremony, Minister Ferrari said the small fish market will surely improve the lives of the Glacis residents and the fishermen, adding that government will continue to seek, through other fishing projects, to continue improving their lives.

Minister Ferrari has called on the community and fishermen to take ownership of the facility to ensure that it is used properly and not vandalised. He also called on the fishermen, in particular, to make some space available alongside them for farmers in the community to sell their vegetables.

Designated Minister Ferrari has thanked all concerned stakeholders for realising the project and the EU for its continued support to the local fishing industry. He also thanked the SFA for the good management of the EU funds destined for small artisanal fishing projects in the country.

For his part, Ambassador Degert said the realisation of fishing projects and their use by fishermen in the country, justify the needs for such funds to be allocated. He commended the idea for the market for the benefit of the fishermen and inhabitants and he noted that the EU is looking forward for the completion and operation of similar fishing projects namely in Cascade, Anse Aux Pins and on Praslin, to sustain the artisanal fishermen and development in these communities.

On behalf of the Glacis residents and the fishermen community, Hon. Esparon thanked the EU for its valued assistance which has brought the project to fruition, and the ministry and SFA for listening to the plea of the fishermen.

“The community is counting on your continued support and cooperation in future developments to take place,” said Hon. Esparon.

She has also launched an appeal to the community and the fishermen to ensure that the place is kept to the highest standard at all times. Taking into account the large number of fishermen in the district, she is also making a plea for Glacis to have its own ice plant.

Since 2021, the SFA has implemented a dredging project at Glacis to facilitate loading and unloading of boats during low tide and also constructed a rock armouring and seawall to protect the eroding coastline.

Other fishing projects are scheduled for this year, among them the construction of a ground plus one building to cater for 14 gear stores for fishermen. It will also have shops and offices.

Mr Elizabeth said the SFA will soon build some temporary gear stores in a location opposite the market as by end of this month, it will be moving out of the property belonging to former President James Mancham (next to the basketball court) and all the stores built with corrugated iron sheets will be demolished to make way for the ground plus one building in the third quarter this year.

The cost of the project has been estimated to be approximately R3million. Due to the scarcity of land in the area, he stated that the SFA will have to engage in discussion with the Glacis authorities and the fishermen association with regards to where to install an ice plant.

Other projects expected to be undertaken by the SFA this year are the construction of a fish market at English River, dredging of a channel on La Digue to facilitate loading and unloading at low tide, and the development of a fishing facility with gear stores at Anse à La Mouche.

Vice chairman of the Glacis Fishermen Association Cliff Morel said although work is being done in phases, the fishermen are very happy with the facility and fishing developments taking place in the district. He noted the most urgent for them now is to be provided with proper gear stores.

Following the opening, Father Eloiblessed the market before guests could tour the facility. 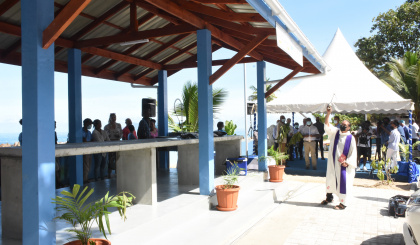