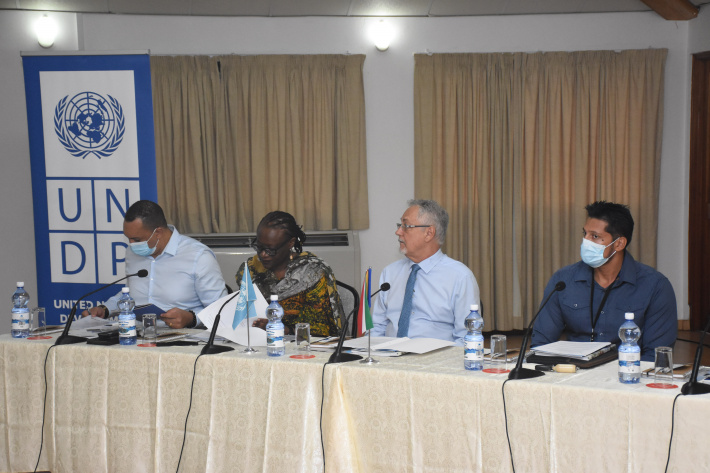 Seychelles hosted the first octopus fishery workshop yesterday at the STC conference room alongside representatives from Mauritius and Rodrigues.

Present for the workshop were the Minister for Fisheries and Blue Economy, Jean-François Ferrari; United Nations Development Programme (UNDP) resident representative for Mauritius and Seychelles, Amanda Serumaga; chief executive (CEO) of the Seychelles Fisheries Authority (SFA), Nichol Elizabeth; Dr Ameer Ebrahim, head of the department of fisheries resources management and technical fisheries coordination at SFA, and others in the fisheries sector.

Organised by Seychelles, the one-day workshop which was facilitated by the UNDP and Ecofish programme, was aimed at sharing best practices and improving octopus fishery in Seychelles.

CEO Elizabeth said: “We want to improve on our octopus fishery in Seychelles. Today, it is an open fishery, not regulated, not managed, anybody can go anywhere in Seychelles and extract, harvest octopus by the quantities they want, to the size they want.”

CEO Elizabeth added that there have been some research conducted in the past, however the species are not known, how big they grow, how many there are and what is the stock.

He stated that this is the very beginning for Seychelles with some grants from the Seychelles Conservation and Climate Adaptation Trust (SeyCCAT).

The SFA will be studying the genetics of octopi in the country by harvesting and buying from stakeholders. Samples will be extracted to be sent to laboratories abroad to understand the genetics and composition of the octopi species present in the Seychelles waters. The research has already begun and is ongoing and CEO Elizabeth added that Seychelles has to learn from its neighbours who have conducted the resource management.

Minister Ferrari noted that Rodrigues has developed good management mechanisms when it comes to octopi fishery and Seychelles can learn from them.

He stated that countries in the region need to share their experiences and learn from each other. The minister firmly said that the ministry is not stopping people from fishing, however it is there to bring about best practices to sustain the species.

Amanda Serumaga, representative of the UNDP, said to her understanding octopus fishery is of vital importance to the Seychelles artisanal fishing community.

She also congratulated the minister for enhancing the south-south cooperation in octopus fishery.

Dalila Hall, a fisherwoman from Rodrigues, said she fishes for octopi in Rodrigues and they gain a lot.

She stated that artisanal fishing is supported by the government and they survey their lagoon.

She added that they engage in the best practices and prohibit the extraction of sea cucumbers in their waters which aids in gaining more products.

As for local fisherman Fabien Antat he said he is in favour of regulations being implemented as some fishermen have been extracting juvenile octopi.

He added that this means the octopi will not have the chance to sufficiently reproduce.

Mr Antat said in a way it is to the disadvantage of those who focus on a specific type of fishing. He ascertained that the stock of octopi has reduced significantly over the years as fishermen have been extracting them too early and they have not had enough time to procreate.

The fisherman said this year the country has seen the impact of overfishing of juvenile octopi as the number of octopi he has caught this year is less than the previous years.

He also stated that he has seen a remarkable reduction of octopi in places that he usually harvests them.

At some particular spots, Mr Antat stated that if during previous years they caught about 40 kilogrammes annually, this year it has only amounted to 4 kilogrammes. The fisherman advises that extracting octopi should be restricted to a particular season and during the closed season fishermen should focus on other products. 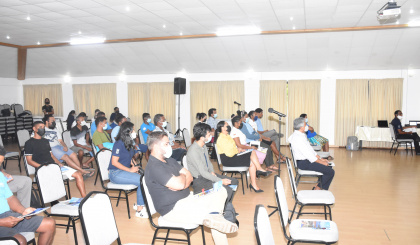 A partial view of participants and guests at the launch of the workshop yesterday (Photo: Thomas Meriton)