Bel Air are leading the chase for automatic promotion to the Premier League next second as they sit atop the 14-team Championship league table.

After amassing 27 points out of a possible 30 from nine wins and a loss, Bel Air, coached by former St Louis and Seychelles national team winger Mervin Mathiot, are in the driver’s seat with three matches left to play against Tigers, Beau Vallon and Glacis who are all in the bottom half of the table.

Au Cap, who trail the leaders by three points after eight wins and two defeats for 24 points, meet Mont Fleuri today in what is expected to be a thrilling encounter with so much at stake. A win for Au Cap will push them on to 27 points after 11 matches played, while a victory for Mont Fleuri will also see them move to 27 points, but they would have played the same number of games ‒ 10 ‒ as Bel Air.

Ahead of this afternoon’s encounter, Mont Fleuri, who are coached by ex-Seychelles’ striker Jeris Cesar, have eight wins and a loss in nine games played for 24 points.

Both Rovers and LMS United are locked on 24 points with the same win lose record of 8-3. They have scored the same number of goals ‒ 37 ‒ but Rovers, who are under the leadership of Diguois coach Juel Ah-Kong, have conceded just nine goals for a better goal difference of +28 compared to LMS United who have conceded 13 goals for a difference of +24.

Rovers are therefore in fourth position, a place above LMS United coached by former Seychelles defender Nigel Freminot, and they are two points ahead of Anse Royale who have played 10 games, winning seven, drawing one and losing two.

Currently in seventh place, Marine Maintenance still have a slight mathematical chance of winning the championship but they have to win all their remaining four games starting today against 10th placed Persévérance.

Mont Buxton Veterans are the only team without a point and a win so far and have conceded the most goals ‒ 92 ‒ and scored the least goals ‒ 7 ‒ in 10 matches played. 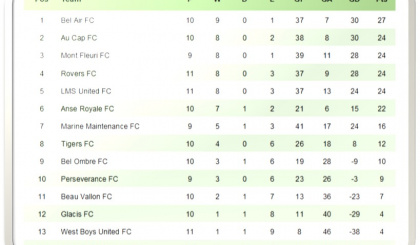 Cricket   Innovation and initiation is the name of the game for Lakstars |01.07.2022