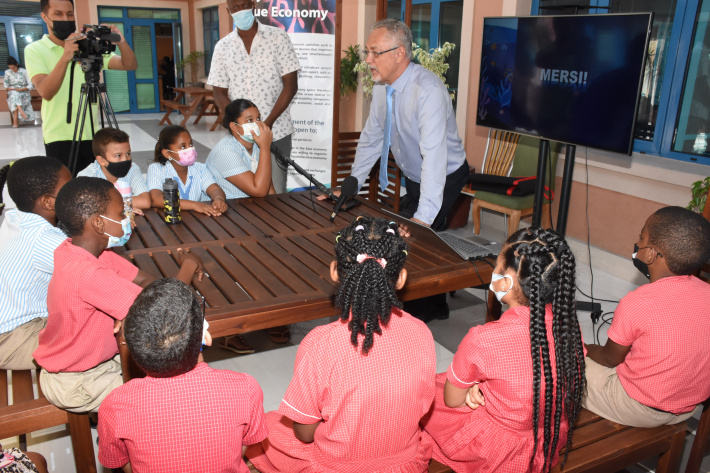 In commemoration of World Oceans Day yesterday, the Ministry of Fisheries and Blue Economy invited a group of primary school pupils to attend some activities at its head office at the Maison Collet.

The activities were graced by the presence of Designated Minister and Minister for Fisheries and Blue Economy, Jean-François Ferrari.

The fifteen pupils were from Anse Etoile, Perseverance and Mont Fleuri schools and they were accompanied by their teachers.

The theme for this year’s World Oceans Day is ‘Revitalisation: Collective Action for the Ocean’ (Revitalizasyon: Aksyon kolektiv pour Losean)

Terence Crea, the principal programme development officer at the Blue economy department, began the activities with the presentation of a video which gave the pupils new facts about the ocean in a fun way.

He also highlighted the critical state most oceans are in today and delivered a presentation to equip the pupils with knowledge on the importance of protecting and preserving the ocean along with all its organisms.

While speaking on the benefits of the ocean, the group discussed the actions that should be taken to protect it, such as beach cleaning and proper disposal of trash.

Minister Ferrari then addressed the pupils, emphasising once more on the importance for each young Seychellois to contribute to the conservation and protection of the ocean.

“The adults, like me, we tend to have bad habits. We need you to join this fight to protect our ocean!”

He went on to explain that children need to understand that taking up these bad habits, such as throwing trash in the sea, will not benefit their future.

Minister Ferrari further added that the wrong practices that take place on land will eventually end up having a direct negative impact on the ocean.

The minister and the students then made a pledge before placing their handprints on a canvas. “We promise to use the ocean, seas and marine resources in a manner that ensures sustainable development,” they swore.

The canvas will be placed in the reception area of the Ministry of Fisheries and Blue Economy so that all the visitors will see the pledge made by the minister and the pupils.

Huan Ho-Tive, a student from Anse Etoile primary school, said he learnt a lot about the Blue economy and the ocean in yesterday morning’s activity.

“I learnt that, in the ocean we shouldn’t kill the animals or throw litter, we should pick up our litter and be good, and don’t catch the small fish because they need to grow for us to get more of them,” remarked Huan.

He added that he will be spreading the word to his friends to encourage them to help protect our ocean as well.

Activities to mark World Oceans Day continued during the day for post-secondary students from the School of Advanced Level Studies (Sals) and Seychelles Institute of Art and Design (SIAD), with a discussion about business opportunities in the Blue economy sector held in partnership with the youth department at the UniSey auditorium, and followed with a beach clean-up along the coast of Anse Royale (see separate article).

The accompanying photos show some highlights of the activities with the pupils. 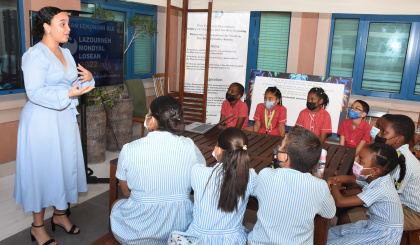 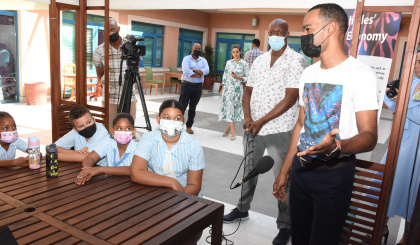