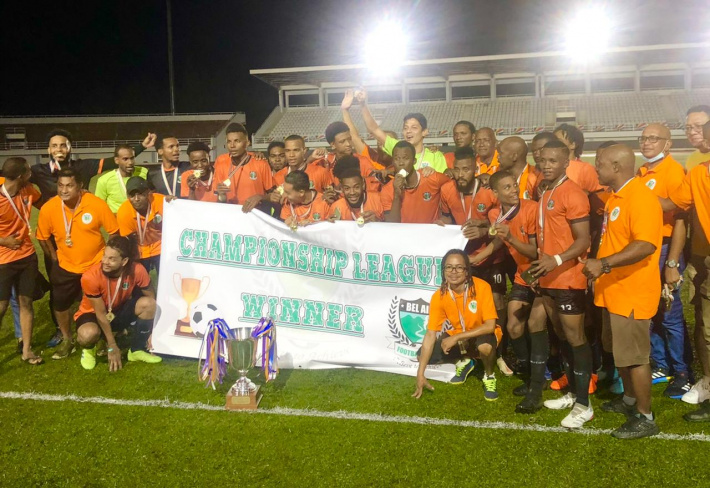 The wait is finally over!

For those of you who have not been following the bottom football league, Bel Air Football Club are the champions of the Championship League and this came after they beat Glacis 3-1 in their last match of the season to secure a Premier League return.

As soon as the objective was accomplished, the party started. And it continued the following day (Saturday). In fact, the Bel Air district was in party mood for the whole weekend and they deserved it as the wait for a return to playing top flight football has been a very long one.

Bel Air Football Club last played in the country’s first division in 1996 ‒ three years after the reintroduction of club sports in Seychelles in 1993. After finishing a place before last in the first division, Bel Air met second division runners-up Ascot on Tuesday December 3, 1996 and lost the play-off match 1-4. Bernard Andoise scored their consolation goal from the penalty spot in the final 20 minutes after Ascot had taken a four-goal lead thanks to goals by Percy Laramé (11th and 69th minutes), Felix Bistoé (20th minute) and Octave (73rd minute).

Going into their match against Glacis on Friday June 24 at Stad Linite, Bel Air had 33 points after 12 games played in the one-round league and Mont Fleuri were breathing down their neck on 31 points after the same number of matches played.

Bel Air FC manager Collin Gappy, who played in the 1-4 play-off defeat to Ascot in 1996, did not want to live another heartbreaking moment as he urged his team to go all out for a win as a draw would have brought their tally to 34 and probably not enough to win them the title as a win for Mont Fleuri would have seen them also finish on 34 points.

His players responded to the challenge and got the deserved win on a 3-1 score to bring their final points tally to 36 in 13 games played (12 wins and 1 loss) and soon after the celebration started.

As for Malagasy captain Berto who has been with the team for four years, he finished as the top scorer with 16 goals.

Following the Championship win, manager Gappy, who accompanied the team on their journey back to top flight football, praised all his players for what he termed as a “job well done”.

“It’s a massive victory for the team and the whole district of Bel Air. We feel exceptional joy as the wait has been very long. We achieved the feat of qualifying to play top flight football after just one season in the second division following years of labouring in the bottom division,” manager Gappy told Sports NATION.

He added that the team recruited former St Louis and Seychelles national team wing back Jude Nancy and goalkeper Joshua Vangadasamy from St Michel early in the season to bolster their chances of earning automatic promotion.

“I would like to thank my players for believing in themselves and for having each other’s back. They played as a real group and displayed the value of friendship very well,” said manager Gappy, who added that they will soon start working on their plan for next season.