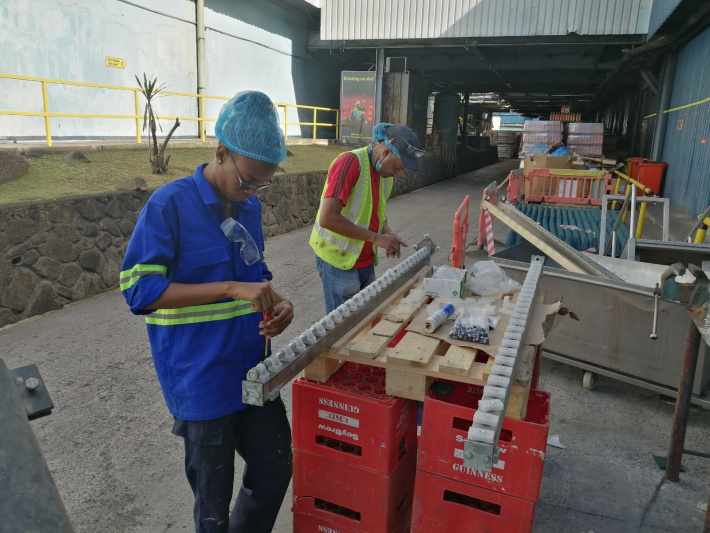 Seychelles Breweries Limited (SBL) is supporting the growth of students from the Seychelles Institute of Technology (SIT) through a partnership on a major line overhaul which is taking place at the brewery since August 24 until September 2, 2022.

The group of nine students that include both males and females are supporting SBL site operators and technicians with additional resource to ensure that the project is completed on time.

The Returnable Glass Line (RGB) overhaul entail servicing of different components of the RGB line including the bottle washer, Empty Bottle Inspector (EBI), Filler and Crowner as well the bottle conveyors, tunnel pasteurizer, labeller, and packer to mention a few.

Being the manufacturer of most of these components (OEM), Krones is providing the technical expertise through a team of skilled technicians to work alongside the SBL team and the group of students from the SIT for the overhaul. OEM from Renner is also on site as they are the manufacturer of the labeller.

One of the main objectives of RGB line overhaul is to improve overall equipment effectiveness and reduce downtime during production.

For the students, participating alongside our local operators and OEM in the line overhaul will provide them with exposure and technical knowledge of different components and machinery of the RGB line. It will give them the opportunity to interact with the OEM resulting in improvement of their skills matrix and ownership.

According to the HR director for SBL, Shirley Louise, “this is true partnership in action and SIT was very enthusiastic and supportive of the project. It is also an example of SBL’s confidence that the students can support to deliver a successful overhaul project even though they have limited experience”.

“It is equally amazing that we can continue to extend the diversity conversation with our partners as we welcome four young ladies in the group all eager and excited to be part of this rare opportunity,” said Mrs Louise.

“SIT is the ideal feeder institution that provides SBL with graduates ready for the world of work that can be absorbed as apprentices and starter roles and in turn SBL is willing to invest in their workplace learning and development,” Mrs Louise concluded.

Two of the SIT students – Kurt Sinon and Stephie Dubel – have described their involvement in the RGB line overhaul as exciting. They say that the employees of SBL and OEM are very friendly and are willing to show them the ropes of handling the machinery themselves.

According to Kurt, participating in the overhaul is bringing a lot of benefits for him. It is providing him with the opportunity to be exposed to this kind of environment before going in the world of work, adding that it is building him with the confidence to undertake tasks independently.

For her part, Stephie said that them being involved in the overhaul is providing her with the opportunity to become independent and to do things on her own.

The photo on our front page shows Kurt working on the belt station on SBL’s EBI under supervision of the OEM from Krones. 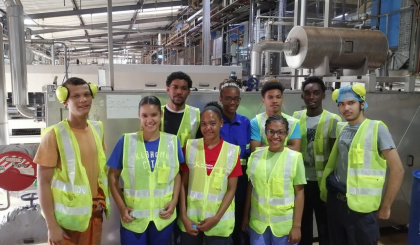 The group of SIT students participating in the overhaul