The winners and the runner-up

After several weeks of competition in the Srihari Group women’s T-15 challenge 2022, team Roaring Lions won the final against Vijay Warriors in the final played last Saturday at the Persévérance cricket ground.

The tournament was sponsored by Hari Enterprise and Hari Builders.

Winning the toss, captain of Vijay Warriors Vanita Patel opted to bat first and they scored a maximum of 62 runs, losing 4 wickets in 15 overs ‒ among them Shamara (11) and Tejasvi (10) were the best batters.

Upon chasing the target, Roaring Lions’ Etee Rao scored a solid 19 runs partnering with Manisha Kanbi who scored 20 runs to eventually win the match for the Lions in just 9.5 overs.

The prize-giving ceremony was attended by members of the Seychelles Cricket Association, the sponsor of the tournament Mr Harish Patel (Hari Builders), and past chairmen of the association Ramesh and Ayub Chaka.

Trophies were given to the winners Roaring Lions, runners-up Vijay Warriors and to the best performers of the tournament.

The prize winners were:

Player of the tournament was designated to Manisha Kanbi (Roaring Lions).

Seychelles Cricket Association (SCA) chairman Kaushal Patel congratulated all the ladies who actively took part in the tournament despite their duties and responsibilities on Saturdays and thanked the women’s cricket facilitators, tournament directors and umpires for their contributions towards the successful running of the tournament.

He shared that soon a women’s league will be organised where all the teams will play against each other and this will improve the quality of cricket among the players. And he also foresees the Seychelles women’s team taking part in international tournaments in the near future, adding that it would be a great achievement. 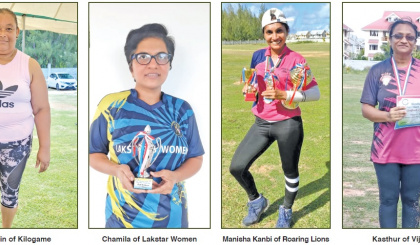 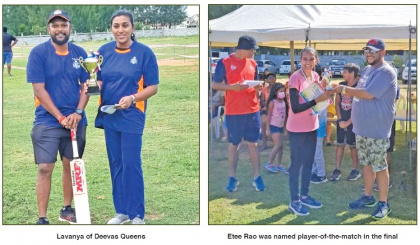